We blast up Festival of Speed hill in ultimate version of supercar. So is it worth the extra £55k? 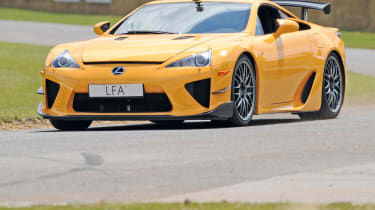 Is the Nurburgring Package an improvement over the standard car? Absolutely. It takes an already outrageous proposition and turns up the visual impact, speed and rarity. Only 50 of the total run of 500 LFAs will get this package, with production starting next year. Owners will also receive a 12-month pass to drive the ’Ring for free, and we suggest they use it. A car with this much performance needs to stretch its legs properly.

If you are going to name a car after the most challenging racing circuit in the world, it had better know its way around it.
Fortunately, the Lexus LFA Nurburgring Package has already posted a seven-minute 22-second lap of its namesake, and sits 10th in the all-time production car rankings. Put simply, this model is phenomenally quick.
[[{"type":"media","view_mode":"content_narrow","fid":"69336","attributes":{"alt":"","class":"media-image"}}]]
Today, though, it’s not the 12.9-mile track in Germany’s Eiffel mountains that it has to tackle; it’s a 1.16-mile hillclimb course in leafy West Sussex. But don’t be fooled by Goodwood’s stunted dimensions. With only a narrow strip of asphalt, blind bends and dry stone walls to contend with, danger lurks around every corner.

And let’s not forget that at lunchtime on Friday, when we’re scheduled to show our mettle, the eyes of thousands of showgoers will be fixed on us, waiting for a dramatic mistake in the world’s only example of this £400,000 special edition. Right now, we wish the car was painted in the subtle optional matt black, rather than the look-at-me lurid orange.
If you hadn’t gathered yet, we’re here for a world exclusive first drive in this even more track-focused version of the world’s most unlikely supercar. We only have one go up the hill, with no practice runs, so there’s no time for holding back.
What exactly do you get for the £55,000 premium over the £345,000 standard LFA? Most noticeable are the aerodynamic carbon-fibre add-ons, including a jutting front spoiler, fins ahead of the front wheel and a massive rear wing. They’re all designed to increase downforce and keep the car glued to the road. To help counteract the additional drag, and maintain the 0-62mph time of 3.7 seconds and top speed of 202mph, the screaming 4.8-litre V10 has been tuned to produce 562bhp. That’s 10bhp more than in the standard car.
Right now, though, the numbers are irrelevant; all we can think about is entertaining the crowd and keeping all four wheels on the tarmac. Working in our favour is the reworked suspension, which is both firmer and 10mm lower. As a result, the ultimate Lexus should corner flatter and faster. Not that the regular LFA rolls like a double decker bus – but at this point, every little helps.
Moments from starting our run, we drop into the black-on-black hand-built cabin, now with carbon fibre integrated into the centre console, door trims and Alcantara-covered seats. We pull on our helmet, squeeze the flat-bottomed wheel and trickle up to the start line.
The first shock is how easy this car is to drive. The steering is light and visibility excellent, making it a doddle to trundle our way to the hillclimb. Clearly, this is a car that Lexus expects to be used every day, just like any other model in its range.
Now, our moment has arrived. As we get the signal to go, we floor the throttle – the rear wheels spin, then it’s into second gear, and the LFA really hooks up. The V10 engine is unlike anything else on the road, revving to up to 9,000rpm – so high that you have to remind yourself to keep your foot pinned as the needle sweeps past the point when even most high-performance units would be calling time.
And it emits an incredible scream as it does so. It’s a note so loud it sounds as though it should be on a race track. After another upshift, it’s obvious that this automated manual is crude compared to the twin-clutch box found in the Ferrari 458 Italia, but it’s so raw that it ends up adding character. Up the straight, the relentless acceleration, then mighty braking forces, are hard to compute.
A few seconds later, and we’re skimming past the infamous stone wall, normally a nervous point, but here we’re treated to a surround-sound symphony from the exhausts. If the Mercedes SLS is a baritone, the LFA is a soprano. We savour one last hit of ferocious straight-line speed before crossing the line, and regaining our breath.
Share this on TwitterShare this on FacebookEmail