471bhp Lexus RC F has on-paper advantage over 425bhp BMW M4. Does it translate to the road? 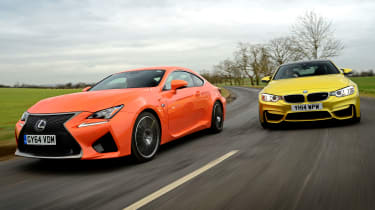 With much of Lexus’ current line-up focusing on comfortable, efficient saloons and SUVs, you’d be forgiven for thinking that a big-engined performance coupé might send out the wrong message to the brand’s potential customers.

However, Lexus also wants to show that it can be exciting and youthful, and its new RC F is the car for the job. If it wants to be the king of the fast four-seat coupé sector, though, the RC F will have to beat the current class leader – the BMW M4.

When the M4 was released last year, we pitched it against the Porsche Cayman S and Audi RS5, with the controversial M car coming out on top and raising the bar in the process.

The RC F and M4 offer a different take on the sporty two-door formula, so to find out if the Lexus can knock the BMW off its perch as our favourite performance car for around £60,000, we tested them back-to-back on road and track.

Click the links above to read individual reviews, and scroll down to see which super-coupe comes out on top... 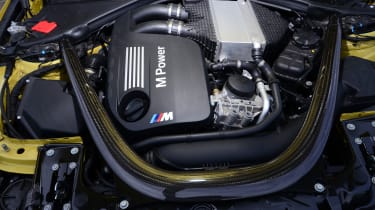 While the bodystyles might be similar, the BMW and Lexus take a different approach to how they make their power. Lexus has opted for a large-capacity, naturally aspirated V8 engine, while BMW has dropped its old V8 in favour of a six-cylinder turbo for efficiency. The result is that you have to work the RC F’s engine and box to keep it on the boil; the M4’s low-down grunt means it’s lazier yet faster in the real world. 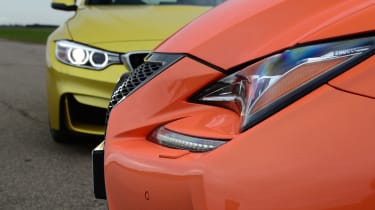 Both coupés look aggressive, and while Lexus’ slashed design works on bulkier models in the range, we’re not convinced by the same treatment on this more delicate two-door, as it appears a bit too fussy. In comparison, the M4 is less in-your-face, but arguably more appealing because of it.

Lexus and BMW have opted for the same sticky Michelin tyres for their performance models. Both serve up plenty of grip, but with wide 19-inch wheels, there’s lots of road roar, too. If you drive either car hard, expect to go through rear rubber quickly. Budget at least £250 each for replacements. 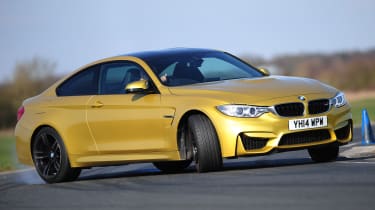 With enough performance to scare some supercars, plus four seats and a big boot, the BMW M4 offers an incredible blend of speed and practicality and comes out on top here. At around £60,000, neither of these cars is cheap, but the M4 offers more bang for your buck – it’s not quite as refined as the RC F, yet it’s still easy to live with and much more capable. It’s the most complete four-seat sports coupé on sale. 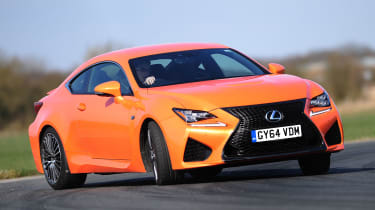 The RC F isn’t without its charm thanks to the big V8 engine, but it can’t live with the BMW’s ballistic power unit or more focused and fun chassis. Plus, it’s not as practical. However, the Lexus offers something different to the norm, alongside lots of equipment and the brand’s strong reputation for reliability. If you want a well built performance two-door that can still handle a back road blast, the RC F is a leftfield choice.