Latest hybrid suv is in a technological field of its own. but is it now a class leader? 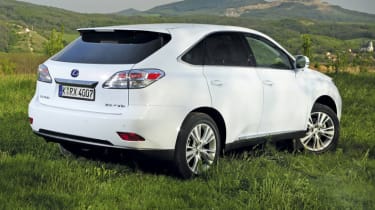 The Lexus RX450h isn’t without its charm, yet the design on the inside and out simply can’t compete with the best Europe has to offer. However, there’s no denying the enormous significance and brilliance of its hybrid powertrain – it’s so far advanced that rival manufacturers have yet to come up with a direct competitor. So while it’s neither as entertaining to drive as an X5 nor as classy or opulent as a Range Rover Sport, the latest Lexus is still a worthy proposition.

Is this the future of the 4x4? Lexus certainly claims it is!

The firm was the pioneer of the hybrid off-roader, and the new RX 450h is aimed at environmentalists and driving enthusiasts alike. Its petrol-electric drivetrain promises impressive economy to go with the car’s rugged ability.

Previously, the RX could be specified with a petrol V6, but UK drivers will now be offered hybrids only. That’s great news for performance, as two electric motors work with a powerful 3.5-litre V6 petrol engine to deliver hot hatch-rivalling pace.

However, engine noise is rather intrusive. Even when accelerating gently, the six-speed sequential CVT box allows the revs to climb too high for truly relaxing motoring.

Economy is much better than before, with Lexus claiming a respectable 44.8mpg combined. Add CO2 emissions of 148g/km, and the car appears far more tempting than many rivals.

Inside, the driving position is easily adjustable, while the leather seats are soft. However, the dash is a disappointing mix of shapes, textures and colours – the dated climate system looks especially out of place next to the high-end Mark Levinson stereo.

But while we have doubts over the design, the quality of the finish inside is beyond question. Lexus’s usual attention to detail ranges from soft-close windows to the computer mouse-style controller for the various cabin functions. The rear seats offer lots of room, and a one-touch mechanism sees them fold 60:40 to increase the boot’s 496-litre capacity.

Out on the road, the hi-tech powertrain should see the car steal the show. Yet the maker has tried to turn the RX into a sporting off-roader with stiff suspension. The result is the same uninspiring handling which held back the previous model, but now hamstrung further by a poor ride. We wish Lexus had just stuck to what it knows best – and focused on comfort as much as technology.

Rival: BMW X5 3.0d although the X5 can’t match the Lexus’s eco technology, it offers a much better blend of ride and handling, as well as pleasing design and superb quality. As a fun family SUV, there isn’t much to match it.