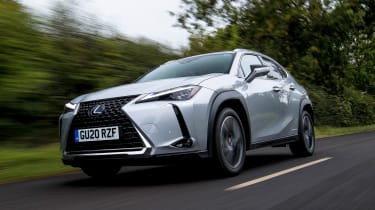 The UX is a likeable compact SUV and arguably the best car Lexus makes. However, few UK buyers will see the benefit in this four-wheel drive version, especially when it costs more to buy, fuel and tax than the existing front-wheel-drive UX - some of the main draws of owning the hybrid Lexus. New smartphone integration has addressed one of two major flaws with the UX, though the other - a tiny boot - remains.

The Lexus UX SUV range is expanding over the next year with a fully electric version taking centre stage, and while the UX 300 e is due to go on sale in the UK imminently, that doesn’t mean that Lexus has turned its back on the car’s hybrid line-up.

That’s because the Japanese firm’s BMW X2 rival is now available with the option of four-wheel drive. The existing petrol/electric setup is aided by a second electric motor mounted on the rear axle, which in low grip situations can supply 7bhp and up to 55Nm of torque to the rear wheels.

The E-Four system, as Lexus calls it, is a layout that the marque claims is more efficient than running the usual prop and drive shafts from a combustion engine to the back axle. It certainly doesn’t bring much of a weight penalty, adding just 60kg to the front-wheel-drive car’s weight.

This means that, for the most part, the UX feels just the same to drive as it always did. It rides on Toyota’s New Global Architecture, used by cars such as the latest Toyota Yaris, Prius and Camry. And like many other TGNA cars, the UX 250 proves to be fairly engaging - yet comfortable - to drive. The centre of gravity feels low, and it turns into corners sharply. It doesn’t have the composure or agility of the BMW X2, but it’s as much fun as anything else in the class.

It’s refined too, helped in no small part by the hybrid drivetrain. In addition to that rear motor, there’s a two-litre Atkinson cycle petrol engine with 150bhp and 190Nm and another electric unit up front with 107bhp and 202Nm. A small battery, which is charged both by regenerative braking and through the petrol engine, allows for electric-only driving for short distances and at speeds up to 71mph. 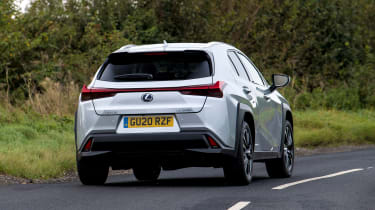 The torque of the electric motors make it feel responsive at slow speeds, and there’s enough low down power from the hybrid setup to mean you don’t need to push the CVT transmission into whining, constant-rev territory under hard acceleration too much. Knock the gear selector to the side, and a semi-auto mode engages, which introduces artificially stepped ratios. It responds well, but the gearing in this mode is very long - it’ll do about 40mph in ‘first’, which feels a little odd.

The hybrid tech really comes into its own in town. Under typical stop/start town driving the UX sips fuel far more frugally than any of its rivals. During our time with it, the UX 250 E-Four actually exceeded the official WLTP-certified 47.0mpg figure across a mix of urban and motorway driving.

But all of this could be said for the front-wheel drive UX, only moreso. With less weight to move and with one less motor drawing energy from the battery, the existing UX can run in EV mode more often and is therefore more efficient. In official tests, the two-wheel drive version achieves 53.2mpg - up to 6.2mpg more than the E-Four. It sits two bands lower in Benefit in Kind ratings too, so it’s cheaper to run for company car users. 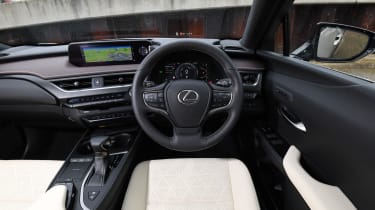 And while some might argue that these are worthy compromises for the extra traction, the fact is that, unless you park in the middle of a wet field every day, very few buyers - in the UK, at least - will ever see the benefits of a system so subtle. If grip in poor weather is really a concern, you may be better served saving the £1,270 premium for the E-Four model and spending it on winter tyres instead.

Two areas in which the UX lags behind rivals from Audi, BMW and Mercedes include a frustrating infotainment system and a tiny boot. Some changes have been made, however.

The boot space is still poor compared to its rivals: the floor is very high, leaving a shallow space that totals just 320-litres. In comparison, the BMW X2 offers up to 470 litres. Even the Audi Q2, whose body is shorter, narrower and lower than the UX, offers 405 litres.

As before, the infotainment is frustrating to use. The 10.3-inch screen isn’t touch sensitive, with all functions controlled through a haptic touchpad which sometimes snaps to on-screen icons, and sometimes floats around like a mouse cursor. However, the introduction of both Apple CarPlay and Android Auto make the interface much easier to bear than before.

All of the other UX strengths remain, the highlight of which is the cabin design. It looks like nothing else in the class, and - some hard plastics on the door aside - feels beautifully finished.

Our test car’s Takumi trim level sits at the top of the range and is priced at £41,420, while the entry-level E-Four starts from £36,770. All models are well equipped as standard, with 18-inch alloy wheels, front and rear parking sensors, heated front seats and steering wheel, leather seats, keyless entry among the features included.