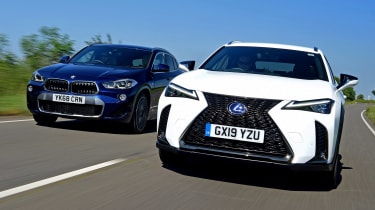 It seems that every new Lexus is stronger than the last, but the brand’s UX small SUV arrived in the UK this year facing a tough set of rivals – closest of which is the BMW X2 compact off-roader.

As their more coupé-like bodies show, both of these models focus a little more on style than some of the functional vehicles in the class, but they’re far from impractical. That’s especially true of the Lexus, with a hybrid powertrain that aims to cut running costs and make the UX a useful proposition as an urban runaround.

Hybrid meets diesel in this contest, then, yet both cars weigh about the same and offer similar power, economy and dimensions, so the battle will be a close-run thing. But which is best? 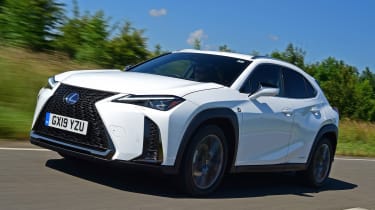 The UX is a car that makes the most of the latest tech that’s on offer to Lexus, which has been bequeathed by parent firm Toyota.

It sits on Lexus’s Global Architecture – Compact platform, with double wishbone rear suspension, and MacPherson struts at the front.

The UX 250h uses a 150bhp 2.0-litre non-turbo petrol engine, mated to a nickel-metal hydride battery and two electric motor/generators. With 107bhp from the electric motors, it means a total hybrid output of 181bhp – plenty for a 1,540kg car. 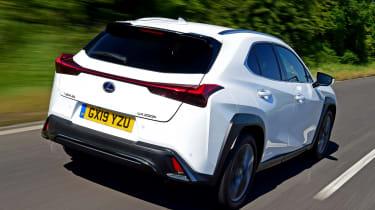 But it’s how Lexus’s fourth-generation hybrid system delivers its power that indicates an improvement over previous hybrids. The software feels more intelligent and, with an improved CVT automatic transmission, engine and electric motor revs are better matched with each other, so there’s a stronger connection between powertrain and driver, plus better refinement, because revs are kept lower.

This was enough for a 0-60mph time of eight seconds, and while this was 0.8 seconds slower than the X2, it’s still enough performance.

The CVT transmission, with no gears, keeps the surging sensation, for which these gearboxes are sometimes known, to a minimum, so it’s easy to make relaxed progress. The electric assistance takes the load off the petrol unit to aid refinement. 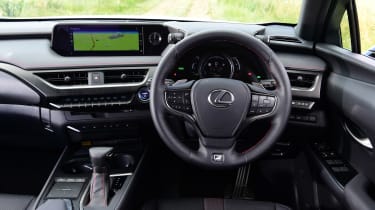 Put your foot down and the engine sounds a bit coarser as the revs rise, but performance is good.

Where you can compare the UX and X2 directly is for ride quality, and here the Lexus offers much more comfort. The chassis is set up on the softer side; the UX’s compliant damping means it doesn’t feel as frenetic or as firm as the BMW.

This approach infiltrates many areas of the car, too; the cabin is nicely made and trimmed, with leather on plenty of surfaces and decent plastics throughout. So it’s all the more disappointing that some of the tech isn’t up to scratch; in something of a Lexus tradition, the infotainment is quite far behind the best in class, represented by the X2.

At least F Sport gets lots of kit with the Premium Plus, Tech and Safety Packs – and the UX still comes in £1,260 cheaper than the X2 in M Sport spec. 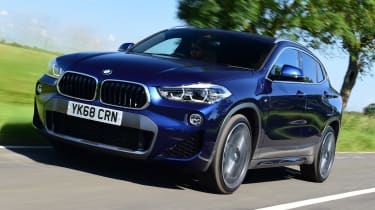 Like the UX, the BMW X2 is a compact SUV that focuses on style – more so than its more practical X1 sibling, too. The car is based on the same UKL2 platform as the X1, and with lesser engines this features front-wheel drive, as opposed to BMW’s more traditional rear-driven approach.

However, here in xDrive20d form the BMW is four-wheel drive. There’s a four-wheel-drive version of the UX 250h available, but no front-wheel-drive X2 xDrive20d. In this sector, where style matters more than off-road ability, it’s not imperative.

Despite the front-wheel-drive architecture, the X2 drives like you’d expect a BMW to, with weighty steering that offers good precision. The dampers deliver taut body control, too, but this M Sport car’s 19-inch wheels (our images show an M Sport X with 19-inch alloys) mean its ride is on the firm side. 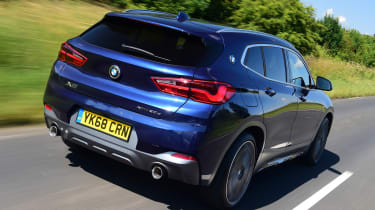 The suspension’s response to bumps is more aggressive and the damping feels more jagged over certain sharp bumps, whereas the Lexus does a more convincing job of rounding these off.

It’s less comfortable as a result – still not so bad that you couldn’t live with it, but you’ll feel more of a bad road surface’s texture than in the UX.

The BMW is more agile than the Lexus, but it still rolls because of the higher ride height. It has plenty of punch low down from its 2.0-litre diesel engine (there’s 400Nm from 1,750rpm), though, so the X2 is quick without having to try very hard.

Its eight-speed auto transmission is great – as easy and unobtrusive as a CVT around town, but quick to kick down and responsive. The result is that, when you ask for more performance, it still feels more natural than the UX’s set-up. 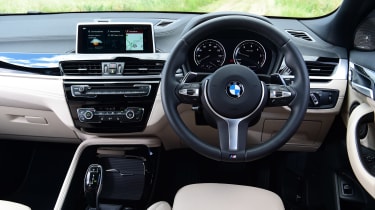 The X2 sprinted from 0-60mph in 7.2 seconds, and through the gears from 30-70mph in 6.8 seconds; the latter was 0.7 seconds faster than the Lexus. Even though the two cars’ in-gear figures aren’t directly comparable because of their different transmissions, both offer similar acceleration from mid speeds.

As you’d expect from a four-cylinder diesel, the BMW’s engine gets noisier at higher revs, but it settles well on the motorway and the powertrain cruises strongly. Around town the motor’s punchy low-down torque means that it’s also simple to drive, even if the visibility in both machines isn’t the best because of their styling. 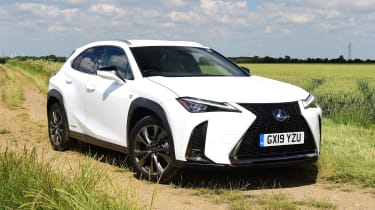 The UX shows how Lexus’s perseverance with hybrid tech and engineering evolution has been rewarded. This is a convincing hybrid that blends refinement, comfort and efficiency in a package that’s more affordable than its rival. It’s just a shame that its infotainment is sub-standard. 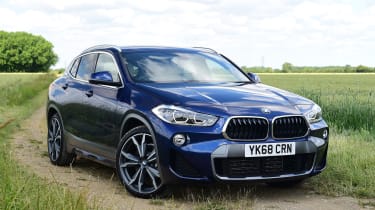 The X2 is still one of the best-driving small SUVs. Its powertrain is as good as ever, while there’s plenty of practicality and the infotainment is about the best in the class. However, the ride and running costs aren’t on the Lexus’s level, plus it’s pricier and has less kit, so it just trails the UX here.