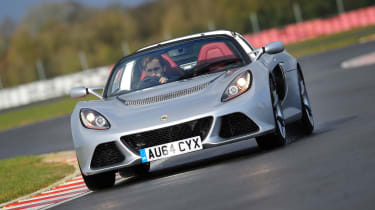 Lotus predicts more than a third of Exige S sales could be made up of autos, yet this unresponsive box doesn’t match the rest of the car’s cat-like reflexes. There have been improvements in efficiency and acceleration, but not enough to make you want to ditch the third pedal. Still, the Exige S proves Lotus still builds some of the best-handling cars around.

Lotus’ philosophy has long been to “add lightness”, but in the Exige S, the brand’s only addition comes in the shape of a new six-speed auto gearbox.

This transmission isn’t strictly new, as it has been adopted from the Evora, but it’s the first time it has been made available in the Exige S. The reason for its introduction is very simple – to help boost sales at minimal cost and open up the market to a new customer base. But is it any good? 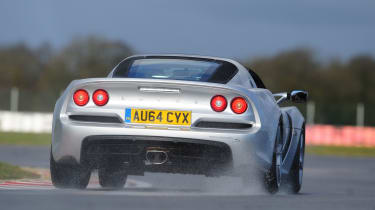 You’ll pay a reasonable £2,000 extra for the automatic version over the manual, with the option of a Coupé or Roadster remaining.

The control panel for the box is neatly crafted into the centre console. Simply depress the brake, prod ‘D’ and you’re off – at speed, too. Stab the accelerator and the rear tyres fight for traction, yet it’s quicker from 0-62mph than the manual, taking 3.9 seconds. 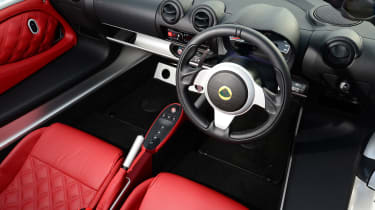 The stonking 345bhp 3.5-litre V6 still nestles behind you, screaming all the way to 7,000rpm, but pulling on the right paddle reveals a notable lack of urgency when selecting the next ratio. Manual upshifts are laboured, which saps away the car’s momentum, but downshifts feel more urgent. They’re still a world away from the rapid-fire PDK you’ll find in a Porsche Cayman, though.

Leaving the gearbox to its own devices shows the Exige S at its best. Changes are well judged, if a little sluggish, but selecting Race on the Dynamic Performance Management (DPM) system sharpens throttle response and adds some much-needed precision.

Happily, the agile, balanced and responsive nature of the Exige S hasn’t been affected. The steering is loaded with feedback, and while the ride is on the firm side, it provides an insight into what the car is doing on the road.