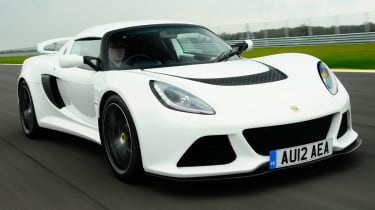 The Exige S mates Lotus’ well proven and most focused chassis to a powerful V6. And although the £52,900 price tag is significant, the car’s performance has been lifted to a level that rivals much more costly, track-focused models like the Porsche 911 GT3. It’s not one for the daily commute, but this is Lotus at its thrilling best.

Lightness and lots of power – it’s a recipe for a serious performance car. And Lotus has taken it to the extreme by fitting the 345bhp 3.5-litre supercharged V6 from the flagship Evora S into the lighter, more focused Exige.
Advertisement - Article continues below
The result is the Exige S. It’s the only Exige you can now buy, and is longer, wider and more aggressive than any previous Exige, with its stretched body and more angular lines. It looks the part, and under the skin the transversely mounted Toyota-sourced V6 is cradled by a new rear subframe, which extends the car’s wheelbase by 70mm.
Video: Watch Owen's video of the Exige S on track
[[{"type":"media","view_mode":"content_narrow","fid":"69359","attributes":{"alt":"","class":"media-image"}}]]
All that power would be wasted if the engine’s extra weight dulled the razor-sharp handling. But by using a mix of Evora, Exige and bespoke suspension components, Lotus’ engineers have managed to retain the taut body control and plentiful grip that have made the Exige such a track day favourite.
Still, the S is more usable on the road, due to the V6’s torque and flexibility. And with the highest power-to-weight ratio ever seen in an Exige, at 0.29bhp per kg, it’s very fast: 0-62mph takes only four seconds. The tuneful exhaust and rorty V6 engine note echo into the cabin and while the rigid ride, road noise and heavy unassisted steering limit day-to-day usability, the less frantic nature of the engine gives the car a new character.
Opt for the £2,000 Race Pack and the Exige S becomes even more focused. This brings high-performance cut slick Pirelli Trofeo tyres and Lotus’ Dynamic Performance Management system. Developed with Bosch, it provides three-stage traction control, which allows you to tailor intervention depending on driver ability and road condition.
In the race setting, the system also increases maximum revs and opens the exhaust valves to make the engine sound even louder. Yet the snappy action of the six-speed manual gearbox and the natural feedback of the steering that Exige and Elise owners love remain. So do the bare aluminium and the simple controls of the confined, basic but well executed cabin.
Advertisement
Share this on TwitterShare this on FacebookEmail
Advertisement