Lotus makes its Exige S faster yet, with the addition of a Performance Pack. we try it out. 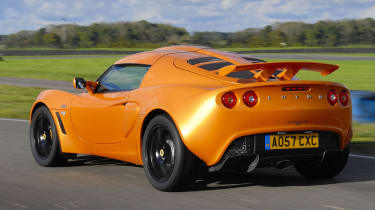 For the performance it delivers, the Lotus represents reasonable value for money. Not even the mighty Porsche 911 GT3 can keep up along the straights! Better still is the extraordinary chassis, which serves up more fun than almost anything else available. It’s not perfect – the cramped cabin and limited refinement are just two of the problems. But when it comes to undiluted driving pleasure, not much else comes close.

How do you improve the quickest car in your line-up? Make it faster... at least, that’s the answer from Lotus.

Launched last year, the Exige S combines lightweight construction, a powerful engine and great handling to create a very rapid machine. Now, however, engineers at the Norfolk firm believe the model needs a little lift. The result is the Performance Pack.

Adding £3,000 to the Exige’s basic list price, the option brings a number of engine and chassis upgrades. Mod­ifications to the existing supercharged 1.8-litre unit mean power increases to 238bhp – a rise of 20bhp.

To make the best use of this, the newcomer has been fitted with the clever variable traction control system from the track-inspired 2-Eleven. And to ensure the Exige stops as well as it goes, powerful four-piston front brakes, developed by the firm’s racing department, are included.

Outside, there aren’t many chan­ges to the distinctive shape. Those with sharp eyes will notice the new engine air intake, which now stret­ches from the top of the windscreen all the way back across the roof.

Elsewhere, it retains the old model’s high rear wing, deep side scoops and menacing black alloys. Squeeze in through the narrow door opening and you’re confronted by an extremely spartan cabin. Heavily bolstered bucket seats, a comprehensive instrument cluster and twin airbags are about as sophisticated as it gets.

It’s a touch cramped, while visibility out of the rear is non-existent because of the intercooler, which is mounted on top of the engine. But this is all forgotten the instant you hit the starter button.

At idle, the uprated Toyota-sourced powerplant sounds a bit rough. Once running, though, it dishes up electrify­ing performance. An integrated launch control function catapults you off the line. The result is a 0-60mph time of only four seconds, while in-gear acceleration is equally blistering.

But the Exige really comes into its own through corners. Thanks to stiff springs and thicker anti-roll bars, the car feels rock solid, and grip is simply incredible. The steering is pin sharp and full of feel, and enables you to place the two-seater with almost surgical precision. How­ever, due to this extremely firm set-up, the ride is very hard even on smooth surfaces, and becomes crashy when travelling over badly broken tarmac.

So, the Lotus is not exactly a sensible everyday machine. Practicality is far too limited, while it’s not refined enough to be a serious proposition for the daily grind. But for that one day on the right road, the Exige S is sensational – and this Performance Pack version is the best of the lot.

Rival: Caterham CSR 260 The CSR 260 is one of the few cars to offer more pace and involvement than the Lotus. But there’s no roof, its cabin is smaller and it’s no more than an expensive weekend toy.