The Lotus Exige S Roadster is the firm's ultimate sports car, but is it a match for the Porsche Boxster? 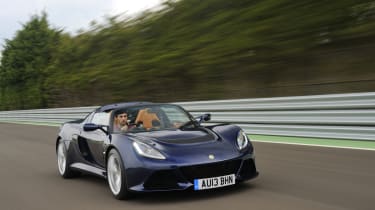 It may seem a bit strange for Lotus to take the most focused model it produces and make it a little bit less hardcore, but the Roadster feels really well judged. It’s more comfortable on the road and a bit easier to fully exploit on the track, plus it’ll only be a fraction slower over the course of a lap. This isn’t the car to go for if you’re a diehard track day fan, but for those buyers who demand extreme performance that’s more usable every day, the Exige S Roadster is a great choice.

Chopping the roof off a focused sports car like the Lotus Exige S would normally be sacrilege, but as we climbed behind the wheel of the new Roadster for the first time, Lotus was promising a car that’s just as engaging and fun as the Coupé.

There are a couple of reasons why: firstly, all the Exige’s rigidity comes from low down in its chassis, so removing the roof has barely any effect. Combine that with the removal of the rear spoiler and front splitter, and you get a reduction in weight of 10kg.

Then there are the other subtle updates like the changes to the camber and the slightly softer damper settings. The result is a car that has lost none of the Coupé’s raw and simple thrill on the road, but with a whole lot more comfort and usability.

It flows wonderfully over cracked roads, and turns sharply into bends, as the steering subtly reminds you of what’s going on beneath the tyres. As with the Coupé, there’s an optional Race pack, bringing a slightly firmer set-up. But unless you’re serious about track use, you don’t need it.

The Roadster gets the same 345bhp 3.5-litre supercharged V6 as the Coupé, but in the soft-top it has more presence. Switch the car from Tour to Sport mode and it opens up valves in the exhaust system, and with no roof you get to hear more of the V6’s unadulterated noise than ever.

The 0-62mph time is the same, at four seconds flat, and the top speed is limited to 145mph, instead of 170mph in the Coupé. Any faster and the roof will fly off. You won’t notice any difference in acceleration, but even with the roof on, the Roadster’s cabin is noisier at high speeds.

There’s also bound to be a tangible difference on track, and the newcomer is 1.6 seconds slower around the test circuit at Lotus HQ in Hethel, Norfolk.

Our time on track revealed the Roadster feels every bit as quick and easy to exploit as the Coupé, with a neutral balance through corners and an effective ESP system that subtly catches oversteer if you press too hard on the accelerator mid-corner. The only time you’d be wishing for a standard Exige S is through high-speed bends, where its superior downforce allows you to get on the power sooner.

While the dynamic differences between the Coupé and the Roadster are minimal, there’s even less between them on price, with both costing from £52,900.

That makes the new car £7,000 more expensive than a Porsche Boxster S – although it’s more thrilling to drive. It’s focused on involvement, excitement and performance – even if it comes at the expense of creature comforts.

And there are compromises, such as the extremely heavy steering when parking and the excessive motorway wind noise. But the slightly softer set-up has made it easier to live with than the Coupé.

If you’re chasing tenths of a second on a track every week, the standard Exige S is the better choice, but for everyday driving we’d pick the Roadster.