Is the brilliant new Boxster S ready to edge out the 911 as the Porsche to own? 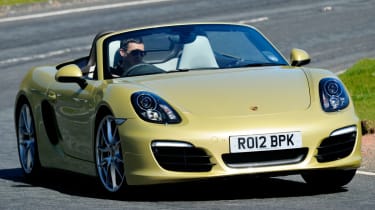 There will always be some Porsche fans who demand nothing less than a 911. However, those people really need to drive the latest Boxster. This S version is one of the best cars the company makes. It’s very nearly as fast as the much more expensive 911 Cabriolet, has a better-balanced chassis and is more fun to drive.

Advertisement - Article continues below
Some people say the Boxster is a poor man’s Porsche, but the new S model puts that idea to rest – it’s as quick around Germany’s infamous Nurburgring circuit as the legendary 996 GT3.
It’s not hard to see why. The Boxster S has one of the finest chassis of any car, incredible brakes and a cracking 311bhp 3.4-litre flat six-cylinder engine – largely the same as the one found in the latest 911.
[[{"type":"media","view_mode":"content_narrow","fid":"68837","attributes":{"alt":"","class":"media-image"}}]]
The engine may not have quite the same low-down pull as it does in the 911 (Porsche couldn’t allow the Boxster to upstage its bigger brother), but it’s still a great performer, and feels stronger than the 2.7-litre engine in the normal Boxster. This extra poke also makes the S a better choice for general driving – crushing performance is just a flex of the toe away.
Advertisement
Advertisement - Article continues below

When it comes to extras, most buyers will pick the paddleshift PDK dual-clutch gearbox, which is £1,992 extra, and automatically blips the throttle on downshifts.
Advertisement - Article continues below
At lower speeds, its changes aren’t quite as smooth as a normal torque converter automatic, but in manual mode, it moves gear faster than you can blink: the car does 0-62mph in five seconds – a tenth of a second faster than the manual car. Fit the optional Sport Chrono Package, which includes a lap timer on the dash and launch control, and you take a further two-tenths off that time.
Really, though, how often do you think you’ll need launch control? Not enough to warrant the £1,861 extra it costs, we’ll wager. Better instead to spend your money on the limited-slip differential with torque vectoring and Porsche Active Suspension Management adaptive dampers. Together, they ensure the car handles to its full potential.
Yet that’s the annoying thing with Porsches – there are too many items on the options list. A wind deflector really should be standard on any convertible, but Porsche wants £182 for it. Little wonder that after options the total cost of our test car was nearly £60,000. Now who was it who said that the Boxster is a poor man’s Porsche?
Advertisement
Share this on TwitterShare this on FacebookEmail
Advertisement