The Lynk & Co 02 is the second crossover model from the Chinese-owned brand, and it’s set to arrive in Europe in 2020 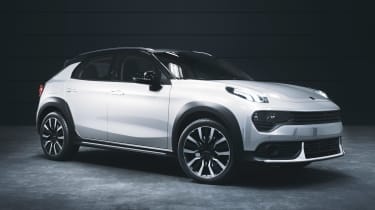 Chinese-owned car maker Lynk & Co has revealed its third production model, while also outlining its plans to build and sell cars in Europe next year.

The new model from the Geely-owned company, and sister brand to Volvo, is called the 02, and it slots in beneath the 01 as a small premium crossover that’s designed to take on the likes of the Mercedes GLA and Audi Q2.

There are obvious design traits from the 01, but they are packaged into a smaller car. This includes the wide, thin grille and raised daytime running lights that are mounted high on the bonnet. 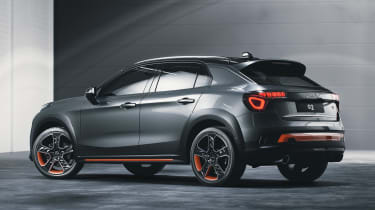 It’s a similar story around the back, because the rear end is largely similar to its bigger brother’s. Thick, cladded wheelarches give the hatchback-sized crossover some SUV street cred, while a large spoiler on the tailgate underlines its sportier, more youthful character. Chief designer Andreas Nilsson explained: “It stands out and is more at the ‘hyper’ end of our vehicles’ range of personas.”

Inside, the dashboard and infotainment set-up again copies the layout used on the larger 01. That means there are digital dials and a 10.1-inch central touchscreen, with prominent air vents perched on top. 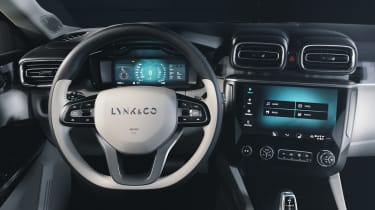 For now, the 02’s design is all that the company has revealed, although it’s almost certain to use Geely’s Compact Modular Architecture (CMA) platform, which is already being used by the Volvo XC40. That means a 1.5-litre three-cylinder plug-in petrol hybrid powertrain is likely to be offered to European buyers.

A mild hybrid variant and fully electric is likely too. Volvo will release an XC40 EV in 2019, allowing Lynk & Co to use the fully electric ready version of the CMA architecture to underpin a future 02 EV. According to Lynk & Co senior vice president Alain Visser, a market launch would have to wait a year or two after the arrival of the plug-in hybrid offering though.

As to when Lynk & Co will arrive in Europe, production of vehicles will begin at Volvo’s plant in Ghent, Belgium, from 2019, with cars on sale in 2020. The brand has announced plans to open urban stores in major European cities from 2020 onwards, with the first in Amsterdam – London will follow.

Right-hand drive UK cars will take a little longer to arrive though. Accoring to Visser, a UK launch for the brand could be "just a couple of months" after European cars launch, but the with the larger 01 arriving first. The 02 could take until 2021 to reach Britain.

Lynk & Co will push a subscription-based ownership model, which Visser expects to account for over 50 per cent of Lynk & Co cars on European roads, although the 02 will be available to purchase outright too, likely priced at around £24,000.