The luxury SUV sector is moving fast: can the Maserati Levante S keep up with the Porsche Cayenne? 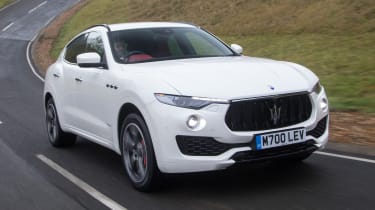 The Levante remains a likeable large SUV for those who prefer Italian flair to German sophistication. The fast and characterful new petrol engine plays to those strengths, too. It’s thirsty, though, and despite the new safety systems, the Maserati falls behind big players such as Porsche when it comes to in-car tech. The overall driving experience could use a bit more polish, too.

Maserati’s first venture into the SUV market has barely been with us a year, but the luxury sector is both fast moving and full of demanding customers. A series of model year updates have been applied to Modena’s Porsche Cayenne rival, and UK buyers also now get the choice of a 424bhp V6 petrol variant.

Adding a petrol model to sit alongside the V6 diesel over here should, in theory, be a smart move, given the clear effect the change in public attitude to diesel has had on car sales. The timing is purely coincidental, according to Maserati bosses, but it’s useful for the brand nonetheless.

The V6 petrol in the Levante is the same Ferrari-developed twin-turbo unit that you’ll find in the Ghibli and Quattroporte saloons. Power is up by 20bhp here, though, while torque sits at a healthy 580Nm. The resulting 0-62mph of 5.2 seconds is slightly better on paper than the Levante’s closest rival – the latest Porsche Cayenne S. 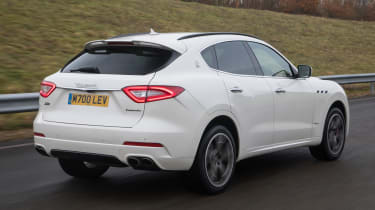 We’ve only driven the turbo variant of the latest Cayenne, and came away impressed with its wide-ranging abilities and sharp driving experience. It’s a high standard for the Maserati to meet, but the first signs are promising at least. The V6 fires into life with a muted growl, and the car hunkers down to the desired ride height setting on the standard-fit air springs.

From the off the Levante S feels plenty fast enough for the target market. There’s a touch of lag as the turbos spool up, but once on song it feels sufficiently gutsy, and despite the forced induction there’s plenty of incentive to push it towards the redline where the motor still feels strong. The eight-speed ZF gearbox is a little slow to kick down in normal mode, but responds speedily enough in sport mode – even if the changes still aren’t as fast as we’d like.

There’s just about enough noise and drama higher up the rev range, too, particularly in Sport mode. However, that introduces a boomy resonance at low speeds that can become tiresome. And while economy isn’t the most important factor in a car of this type, an official combined figure of under 26mpg isn’t one that will have you waxing lyrical about its eco credentials.

There are no suspension changes for the petrol Levante, so the SUV continues to ride on height adjustable air suspension with adaptive damping. It handles tidily enough, with a clear sporting intent and decent resistance to roll in Sport mode. The lighter petrol engine means keener turn-in on corners as well. The four-wheel drive system is nicely rear-biased but Maserati has replaced the old hydraulic steering system with an electric set-up to allow more driver assistance systems to be fitted. It’s fine in essence, but robs the driver of some crucial interaction. 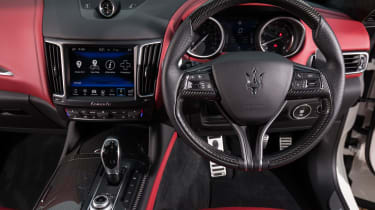 We take more issue with the ride, which never really settles on the UK’s variable roads. It deals with big bumps and potholes effectively, but small, sharp intrusions cause the Levante to fidget and crash over poor surfaces more than SUVs from premium rivals. It’s a pity, because wind and road noise isolation is respectable.

Model year changes for the Levante include two new trim levels – the luxury GranLusso (which has exotic Zegna silk upholstery) or the racier GranSport we tested. The GranSport receives black detailing for the exterior, red brake calipers and 20-inch alloy wheels. Soft-close doors also feature, which is a neat touch.

Inside, it’s pretty much business as usual – the Levante’s cabin has plenty of rich materials and soft leather, plus decent build quality, but some switchgear doesn’t feel as premium as the pricetag suggests. There is a raft of new active safety systems now, including adaptive cruise control, lane keep assist and traffic sign recognition. It brings the Levante in line with rivals on the safety front, but the infotainment and in-car tech is still a long way behind the best. It’s not particularly spacious for rear passengers, either, especially given its sheer external size.