The Maserati Levante range has gained a new entry-level V6 petrol option, but the overall package still trails behind many of its rivals 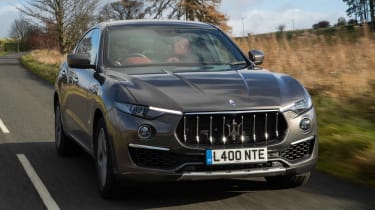 The latest version of Maserati’s best-selling car has lots going for it, but it is by no means a class leader. Performance is well behind that of a Porsche Cayenne Turbo, as are its economy and emissions. Cabin quality isn’t the best, either, even if the space on offer is excellent. Yet on the road, and on the eye, the Levante has strong appeal, and in basic V6 guise it’s well priced. A mixed bag overall, which makes it a true Maserati.

When Maserati unleashed the Ghibli-based Levante SUV in 2016, its global sales pretty much doubled overnight, and at that point it was fair to say that Maserati, the brand, was well and truly back in business.

Two and a half years down the line the Levante continues to do very well indeed for Maserati, with China being its number one market followed by the USA, Germany, Italy and the UK sitting at number five. Yet on the horizon there was a problem facing Maserati’s biggest selling car.

By far the most popular version is the V6 turbodiesel, which is not surprising because it’s also the cheapest Levante you can buy. But we all know what’s happening to the diesel market at the moment, so despite the fact that – in the UK at least – the Levante Diesel continues to account for around 70 per cent of overall sales, something had to be done. 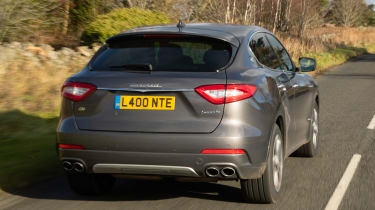 Enter this new entry-level 3.0-litre V6 petrol-powered model, known simply as The Levante. In basic trim it costs a seemingly competitive £61,425 and is capable of 156mph courtesy of its 345bhp twin-turbo V6 engine. Zero to 60mph takes 6.0 seconds compared with 6.9 seconds for the £58,315 diesel model, although in terms of economy the petrol V6 Levante driver takes a fair old hit beside their diesel-engined equivalent with just 23.5mpg versus 34.0mpg.

Other more sporting and/or luxuriant models are available with the same engine, both costing £69,425. The luxury variant is called GranLusso, the more sporting model GranSport, but apart from their differing interior trims and some styling elements to differentiate them on the outside – the GranSport’s front end styling is much more aggressive – all three new versions of the Levante are essentially the same car.

Inside, the centre console has been redesigned and includes a new lever for the eight-speed auto gearbox while the seat leathers have been upgraded on all versions. Outside, there are also new LED Matrix headlights plus a range of new colours and bigger wheels with either 20in as standard or optional 21in rims. There’s also a new “Nerissimo” trim level with moody all-black paintwork.

All V6 petrol Levantes get the same electric power steering that was introduced on the Ghibli late last year, and they all come with Maserati’s “Skyhook” adaptive air suspension as standard. Maserati is proud to point out that no other rival comes with either of these elements, although they are available as options on the Range Rover and Porsche Cayenne.

On the road the Levante is a mixed bag to be honest. On the one hand it does feel unusually agile for such a big, heavy SUV that weighs well over two tonnes. It’s bigger physically than both the aforementioned rivals yet from behind the wheel it doesn’t seem anything like as vast, especially compared with a Range Rover.

The V6 twin-turbo engine also delivers strong but by no means class leading performance. You need to rev it quite hard to get the best out of it, and there’s never the same mid-range surge of energy that you get from a Cayenne Turbo, although the engine combines well with the eight-speed auto, even if the absence of paddle shifters in the GranLusso version we drove was a curious omission. These cost £270 extra, which seems a bit mean in a 70 grand Maserati. 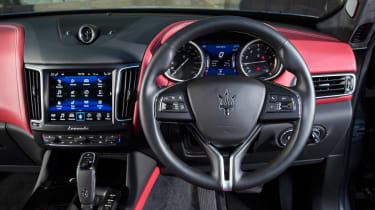 Even so, you can drive this Maserati Levante with real sporting intent and it won’t roll around in the way you might expect it to. From this specific point of view it’s surprisingly sharp to drive, especially if you select Sport which tightens up the dampers, weights up the steering a touch and puts the exhaust, engine and transmission into fruitier modes.

But on the other hand its refinement levels, and its ride quality in particular, aren’t where they need to be to compete at this rarefied level. Even in Comfort mode the ride is too firm, too fidgety, too busy, while the level of tyre roar is also too intrusive beside the best rivals.

On top of this the cabin, though well enough equipped for the money, lacks the fundamental high quality feel you get in the main competition. At least the amount of space on offer front and rear, and in the boot, is hard to knock.

So, for the keen SUV driver who doesn’t necessarily want what everyone else has got, the Levante remains and interesting, if flawed choice. In some areas it’s excellent, but in others it frustrates. And sometimes even disappoints. It’s a Maserati then, right to its core.