Despite only being just over a year old, the Maserati Levante has received a facelift. Have the updates improved the brand's first SUV? 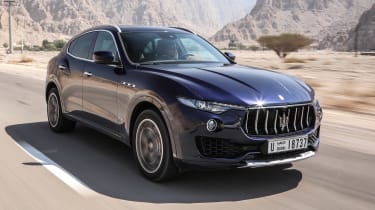 Maserati’s first SUV has been updated for 2018, and while it looks the same on the outside, underneath the maker has added a host of changes. The new V6 petrol is welcome but it isn’t the class act it should be, while the electronic power steering removes a key level of driver involvement. Maserati could have perfected the Levante with this update; instead it’s underwhelming in a class where only excellence is accepted.

Maserati launched its first ever SUV last year, with the type of splendour normally reserved for a new Pope. Since then it has shifted 25,000 Levantes around the world – making it the best-selling Maserati for some time. But its appeal was always hamstrung by its confusing trim packages, so-so handling, limited safety equipment and just one engine option.

However, for 2018, the Italians have given their SUV a fine going over, and the results should make the upmarket off-roader a little more tempting to buyers.

You’ll struggle to tell the revised Levante apart from its predecessor. Maserati hasn’t taken this opportunity to give the big SUV any tweaks in the styling department, so park a 2016 car next to a new one and it’s a tough game of spot the difference. The only real clue is a small chrome badge on the lower half of the front wing: it reads either ‘GranLusso’ or ‘GranSport’ depending on trim – and here we’re testing the new petrol-powered Levante S in GranLusso guise. 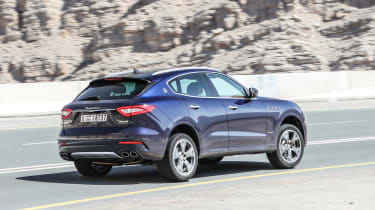 GranSport, as the name suggests, is the more sporting of the two, and can be recognised by gloss black trim, 20-inch wheels and red brake calipers. On the inside there’s lashings of carbon fibre and a sports steering wheel with paddle shifters.

Maserati has added a wealth of extra safety kit, too. There’s now adaptive cruise control with Stop & Go, forward collision warning, lane keeping assist, blindspot alert, highway assist, and traffic sign recognition bundled in as well. It’s a package that costs £1,500 – or £2,525 with an around view camera thrown in.

Elsewhere, Maserati has ditched the Levante’s hydraulic steering for an electric set-up, which apparently makes the car more comfortable to drive around town without ruining the model’s sporting characteristics. But the old car’s hydraulic set-up was one of the Levante’s treats and delivered pleasing feel and consistent weighting. Now, though, the steering feels rubbery in the car’s Normal model, while in Sport it’s heavier but disappointingly numb. 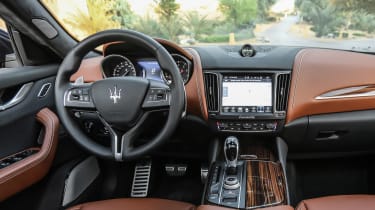 The electric set-up makes the Maserati feel remote – preventing you from carving through tight, twisting corners with confidence like you can in the outgoing Porsche Cayenne. The result is a car that fails to bely its size, always feeling large and a little bit cumbersome.

We also drove the car on the dunes of the Dubai desert, where it performed well – thanks to the Q4 all-wheel drive system offering plenty of traction. The Levante would be outclassed by a Range Rover Sport on the toughest off-road terrain, but even though it’s a road-biased SUV it showed plenty of strength on soft ground.

But to add some appeal, Maserati now offers the car with a petrol engine. Up to now, the sole choice has been an off-the-shelf 3.0-litre V6 diesel bought in from VM Motori, but the petrol is more of a family affair. Badged ‘S’ it’s a 428bhp 3.0-litre twin-turbo V6 built by Ferrari, no less, and promises to offer a tuneful engine note to match the Italian’s suave character. 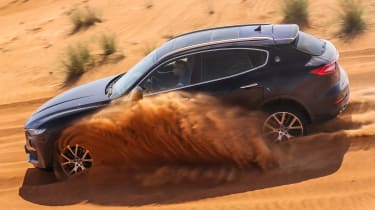 On paper then, the new Levante has all the ingredients to be a good step-up from the previous model, but in reality it’s a mixed bag. The power delivery is good, with the engine’s brawn arriving at 5,000rpm – picking up speed quickly and hitting 62mph in just 5.2 seconds. That’s as fast as the soon-to-be-replaced Cayenne GTS, meaning the Levante is no slouch.

The engine is also well matched to the ubiquitous eight-speed ZF gearbox, and shifts cleanly up and down when left in auto mode. Manual changes are just as sharp, only slightly marred by a stubborn gearlever and springy-feeling paddle shifters.

But, surprisingly, it’s the sound that disappoints most. When revved out to the red-line it’s clear Ferrari has had a hand in its development, but at idle the engine note ranges from booming to a course growl. Flicking to Sport mode only amplifies this.

Elsewhere it’s the same as the outgoing Levante, so the interior looks good and the quality of leathers used is excellent. Switchgear shared with cheaper Fiat models frustrates, however, as does the slightly haphazard infotainment menus.