The all-new Porsche Cayenne has arrived, and we try it out in range-topping Turbo guise 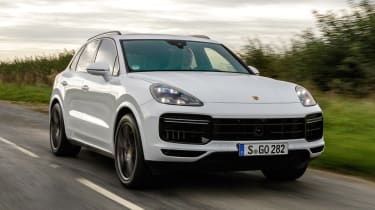 Porsche describes the new Cayenne as its ‘sports car for five’, and corny as it sounds, it’s alarmingly accurate. While the Cayenne has always offered enormous performance, the new car possesses a more attractive and modern interior, significantly improved refinement and even more agility on the road. It’s not a cheap car to buy or run, and won’t be to all tastes, but there’s no denying it’s all-round ability.

The Cayenne defined the large, sporty SUV market when it first appeared in 2003, and while the 911 remains the essence of the Porsche brand, it’s the big 4x4 that the maker simply has to get right from a cash-generating perspective.

This new third-generation model is based on the same platform that underpins both the Bentley Bentayga and the current Audi Q7. Once again though, Porsche has spared no effort in adapting it to its own needs, and never more so than with the flagship Turbo model tested here.

At launch there will be no Cayenne Diesel. Two other petrol models available, however: the standard Cayenne, which uses a 335bhp single turbo 3.0-litre V6, and the more powerful 434bhp Cayenne S, powered by a 2.9-litre bi-turbo V6. 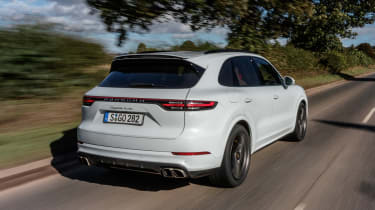 Although Porsche claims the new Cayenne is up to 65kg lighter than its predecessor, the new Turbo tips the scales at a not-insignificant 2,175kg. Downsizing seems a silly word to apply to the new car, then, but like the latest Panamera, this new version ditches the old 4.8-litre engine in favour of an all-new, smaller 4.0-litre V8.

With the benefit of twin turbochargers it produces 542bhp and a massive 770Nm of torque (up 30bhp and 20Nm respectively over the old car). With the benefit of a slick-shifting eight-speed automatic gearbox, an active four-wheel drive system with a multi-plate clutch, a variable rear spoiler, and Porsche’s optional Sport Chrono with launch control, the new car can sprint from rest to 62mph in as little as 3.9-seconds. The top speed is an impressive 177mph.

This range-topper gains a unique 21-inch alloy wheel design packaged under colour-coded wheel arch extensions, LED head and tail-lights and four exhaust pipes. The new Cayenne is longer than the outgoing car, but lower, too. It’s a smoothly surfaced, chunky shape, if a predictable one. 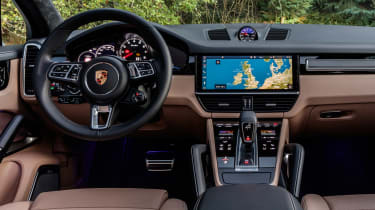 On the inside, the cockpit is dominated by the same 12.3-inch HD touchscreen that was first seen in the new Panamera, while straight ahead of the driver is a large, central rev counter – with further HD screens either side of that. The Cayenne retains its sporting bent inside with a lower driving position than you’ll find in a Range Rover, along with its high central tunnel. It all feels extremely well put together, with a perceived solidity that puts some rivals to shame.

The 18-way adjustable sports seats allow plenty of scope for a good driving position, too, and the rear seats recline, while also sliding fore and aft for improve leg or boot space. Speaking of which, the Cayenne now boasts an extra 100 litres of luggage volume, albeit slightly reduced to 741 litres in the Turbo model. For comparison, a BMW X5 offers a 650-litre loadbay - albeit one that is also available with seven seats.

Under the skin, the new Cayenne has a formidable arsenal of technology to make it handle better than ever on-road, but also off-road, too. The variable three-chamber air suspension offers greater breadth of control, while there’s a multi-link suspension setup front and rear overseen by a new 4D chassis control software that monitors everything the car is doing, tailors all the systems accordingly. 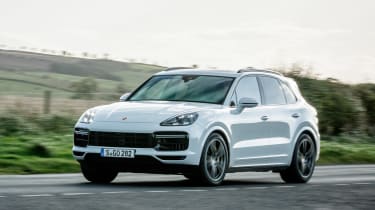 With torque vectoring, optional electrically-operated anti-roll bars (PDCC), and rear-wheel steering (also a cost extra), the Turbo offers five on-road drive modes, plus Gravel, Mud, Sand and Rock settings. There are six ride height levels, and while we didn’t get to try the car off the public highway, our experience with the Bentayga suggest there’s every reason to believe it should be highly capable.

On the road, the Cayenne Turbo sets new dynamic standards for an SUV, with smooth consistent steering that would be accurate enough for use in a proper sports saloon, let alone in a vehicle such as this one. But what’s really to its abilities are the options of PDCC and electric rear steering. The former not only has an iron grip over the Cayenne’s body movements during high speed cornering, but perhaps more importantly, slackens everything off when the Cayenne is driving normally on motorways or straight A-roads. This really improves the ride quality and removes the jiggling from side to side that is often so apparent in cars like this.

The Turbo is an effortless high-speed cruiser: refined, comfortable, and always with immense power in reserve. The V8 has a subtle rumble when ambling on, but a strident hard-edged roar when extended. Whatever the gear or situation, it never feels as though it is struggling with the Cayenne’s mass. Moreover, the rear-wheel steering makes the Cayenne astonishingly maneuverable for its size and weight. 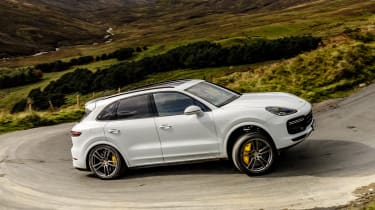 With Porsche’s trick torque vectoring, the Turbo can even be coaxed into a slide - not the sort of behaviour many will want to access, and almost alarming the first time it happens, but incredibly effective at getting the nose pointed into a corner. Special mention must go to the brakes as well, which have spectacular stopping power and endurance - particularly if you spec the optional carbon ceramic setup.

Although there are plenty of ways to inflate the price of your Cayenne Turbo via the options list, standard equipment is actually very generous. All cars come with heated seats all round and an excellent surround sound stereo, though for a whisker shy of £100,000, you expect a few toys. However, with optimistic economy and emissions figures of 24.1mpg and 267g/km, the Turbo will be reassuringly expensive to run.