Buying a Maserati has always been an emotional decision - it's a matter of the heart versus the head. Although very few car makers produce models that look as dramatic, better engineered vehicles are available. Of course, the Italian firm wants its cars to be as good under the bonnet as above it - and none more so than the new Quattroporte. 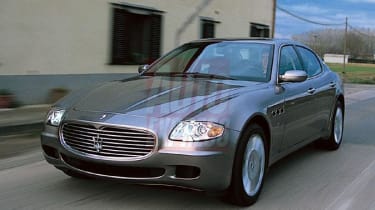 The Quattroporte looks stunning inside and out, but is let down by its automatic transmission, which is simply not smooth enough for a limousine costing this much. However, the car performs better in semi-automatic mode and gives a passable impression of being a sporty Grand Tourer.

Buying a Maserati has always been an emotional decision - it's a matter of the heart versus the head. Although very few car makers produce models that look as dramatic, better engineered vehicles are available. Of course, the Italian firm wants its cars to be as good under the bonnet as above it - and none more so than the new Quattroporte.

In order to try and put some clear water between itself and its predominately German rivals, Maserati has tried to create two cars in one with its new saloon. According to the company's engineers, the Quattroporte is a luxurious motor to be chauffeured around in during the week, but come the weekend, when the business suit is hanging in the wardrobe, the car becomes a vehicle that the owner will want to take for a spin down a country lane.

Apparently, this transformation is due to the six-speed automatic Duo-Select gearbox. Maserati claims it makes the Quattroporte the perfect limousine in fully automatic mode but, with the press of a button, it becomes a sporty little number that will leave you smiling. Unfortunately, though, the newcomer is more likely to make you frown at what could have been. The gearbox, which is meant to be the gateway to this dual-motoring nirvana, turns out to be the Maserati's Achilles heel.

In automatic mode, changes come too early and there is a lag between leaving one gear and finding the next. This disrupts the smooth progression of the car. Neither is it great at providing a burst of speed. Kicking down the throttle makes the box search frantically for a cog before finally delivering the power. But it's well worth waiting for the thrust from the 400bhp 4.2-litre V8 powerplant to arrive. Despite being a big machine - the Quattroporte is more than five metres long - it still covers the 0-60mph dash in only 5.2 seconds and is capable of going on to reach a 170mph top speed.

The Maserati makes more sense in semi-automatic mode, when the driver gets to decide when to change cogs. Put your foot down on the accelerator, take the rev counter up to 5,000rpm and the Quattroporte comes alive. It's a totally different machine, and tight bends and sweeping roads are quickly swallowed up. UK versions will cost £69,995, and this includes the first three services, a Navtrak vehicle tracking system and three-year unlimited mileage warranty. Optional extras in-clude an electric sunroof, coloured brake calipers and a tailor-made five-piece leather luggage set costing £2,468.

As for niggles? Well, engaging rev-erse is not as easy as it should be, since the little lever between the front seats is awkward to use. And 14.9mpg fuel economy won't endear the car to buyers, even those with deep wallets.

Ultimately, it's hard not to be disappointed by the Quattroporte. It raises the emotions with its looks and high quality interior, but is not as good to drive as its German rivals. Buying a Maserati is still a heart versus head decision.