The Italian firm has sharpened the chassis of its flagship saloon. We get to grips with the new GT S. 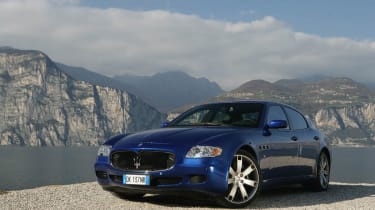 THE Quattroporte has always had plenty of appeal, and the new Sport GT S is the most exciting model to drive in the range. Despite featuring stiffer and sportier suspension, there’s little compromise with the ride quality. So if you have the money, and want a luxury saloon that stands out from the crowd and offers coupé levels of entertainment, the Sport GT S is hard to beat.

IT seems that Maserati drivers are a pretty demanding bunch. Not content with the standard four-door Quattroporte, buyers have asked for a new model which is even more involving to drive. The result is the car here. It’s called the Sport GT S and will sit above the flagship Sport GT when it goes on sale in January.

Visually, the GT S is distinguished from lesser Quattroportes by a mean-looking bodykit. The car has a black chrome mesh grille, plus matching exhaust pipes. The chrome window surrounds have also been deleted from the specification list, and these changes – together with the unique 20-inch alloy wheels and body-coloured door handles – give the big Maserati a purposeful appearance.

Inside there is a revised cabin, which can be enhanced further with bold colours, while the front seats are reworked with Alcantara inlays. New carbon fibre trim on the centre console, gearknob and dashboard has been added as well. The result is that what was already a well appointed and comfortable cockpit feels far more racy – especially if you go for the red and black trim on our model.

But it is under the skin where the most significant changes have been made. Unlike other versions of the Quattroporte – which use the Italian firm’s self-adjusting Skyhook suspension system – the GT S features a traditional spring and damper set-up. It adds 25 per cent stiffer springs and lowers the car’s ride height.

On the road, this translates into improved cornering stability with less body roll. But the really good news is that even though the car feels much more sporty and agile, the ride quality is hardly compromised at all.

More powerful brakes are another addition. Six-piston Brembo calipers feature up front, while dual-cast discs are used all round – a first for a road car. These have an aluminium centre that saves weight and, according to Maserati, increases feel and reduces fade by dissipating heat quickly.

Yet while the brakes on our model felt strong, there was very little initial bite. This, however, could be down to the fact that they were so new they hadn’t bedded in properly – and needed a few more miles of use to reach their full potential.

Surprisingly, despite its sporting pretensions, the Quattroporte GT S will be offered only with a six-speed automatic transmission rather than the DuoSelect clutchless arrangement or even a traditional manual. This is a pity, but it’s no great problem as there is a sport function and you can still shift gears using steering wheel-mounted paddles. The real benefit of this system is smoother changes, especially in fully automatic mode.

And in this respect the GT S fills the brief of being the best Quattro-porte in the range. It provides the most sporty driving experience of the entire line-up, yet still offers plenty of comfort and luxury. But the big question is, will Maserati customers be happy with the results? On the evidence of our early drive, the answer has to be a resounding yes!

However, with such lofty ideals there’s bound to be a hardcore of drivers who reckon the brand could take things further... We can think of at least one improvement company bosses could make. If we had a single request, it would be to offer a manual version – and soon!

Rival: MERCEDES S63 AMG When it comes to performance, the range-topping Mercedes is simply stunning. Its 6.0-litre V12 engine develops a massive 604bhp and propels the S63 from 0-60mph in 4.4 seconds. What’s more, the car is fabulously well built and comes loaded with kit. At £95,567 it costs nearly £10,000 more than the Maserati – and yet the Merc isn’t as classy, stylish or exclusive.