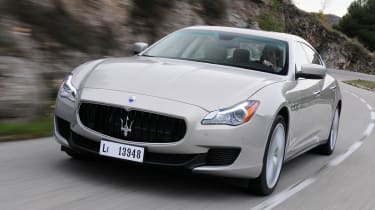 The old Quattroporte was a car that stood out. The looks were elegant, the engine was raucous and the handling was more sports car than limousine. For the new car, Maserati has changed tack and followed the ‘S-Class’ crowd a little more. In isolation, it’s fantastic in every way and it’ll certainly provide the boost in sales the firm is after, but you can’t help but feel Maserati has sold part of its soul.

The Maserati Quattroporte has always been a bit of a wildcard choice in the luxury limousine segment; its raucous exhaust note, sharp handling and raw emotional appeal offered something the Germans couldn’t match. But with Maserati targeting growth from just 6,200 total sales last year to 50,000 by 2015, the new Quattroporte might have to be just a little bit more sensible.

It’s completely new from the ground up and features a few more aluminium bits in the chassis to help make it 100kgs lighter than the old car (although it still weighs almost two tonnes). More importantly for this class – and to address a criticism of the old car – it’s longer so there’s a lot more space in the back seats.

The styling is new, too, The effortless elegance of the old model is replaced by Maserati’s fresh design language, which looks a little too Kia or Hyundai-inspired for our tastes, but there’s no denying its presence.

And what of the howling naturally-aspirated 4.7-litre V8 in the old model? At launch it’s been replaced by a choice of two brand new engines – both developed and built by Ferrari. The lesser of the two is a twin-turbo 3.0 V6 with 404bhp, but we’re driving the 3.8-litre V8 version, which produces 523bhp. The old Quattroporte S managed just 434bhp.

The result is a 0-62mph time cut from 5.3 seconds to 4.7 seconds and a total shift in the way this car feels from behind the wheel. The frantic acceleration of the old naturally-aspirated engine has been replaced by a relentless and effortless wave of torque. The noise is more subdued, too, and while it still makes a fantastic growl, this car certainly feels more limousine than sports car.

The handling is still seriously impressive considering this car’s bulk. It feels light on its feet through tight and twisty roads, and through the longer flowing curves it grips hard. It’s not as playful as the old Quattroporte but incredibly quick steering means it’s still pin-sharp.

All-new independent suspension allows for a comfortable ride, which exhibits only a hint of firmness over rough roads. Combine that with hugely comfortable seats and a cabin that’s excellently insulated from the outside world and the Quattroporte is a much more impressive cruiser.

On the inside, simplicity is the key with fewer buttons, a clear layout and a large touchscreen in the middle of the centre console. The fit, finish and general attention to detail are all superb.

Fuel economy is a little more sensible, too. The downsized engine now manages 23.7mpg, which is up from 15.7mpg in the old car. CO2 emissions have also been cut down from 365g/km to 278g/km, and the smaller V6 engine will be more efficient still.