Has high-speed Maserati Quattroporte limo got what it takes to beat the Jaguar XJR and S63 AMG? 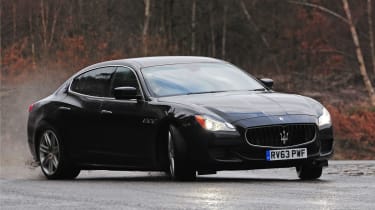 Anyone after a high-powered saloon is spoiled for choice, yet the Maserati Quattroporte GTS can hold its own against the Jaguar XJR and Mercedes S63 AMG. It has the same playful handling and fruity soundtrack as the Jaguar, although it doesn’t match the Mercedes for luxury or hi-tech gadgets. Its wonderfully indulgent and full of character, but it’s the V6 diesel model that makes most sense, so the GTS is unlikely to dominate UK sales.

The fastest Ghibli in the rapidly expanding Maserati range is a bit of a mixed bag, but what about the bigger and plusher Maserati Quattroporte GTS? We got to try it in the UK at the same time as the smaller saloon.

This car’s 3.8-litre V8 produces 523bhp and up to 710Nm of torque on overboost, and takes performance up a notch or two over the Ghibli S, sprinting from 0-62mph in just 4.7 seconds. Only exotic rarities like the Aston Martin Rapide and Bentley Continental Flying Spur can match its 190mph top speed, but both cost a lot more.

The powerplant was developed with Ferrari and is built at the sister company's factory in Maranello, and will power the heavily facelifted California, which is due to be revealed at the Geneva motor show this March. If anything it sounds even better than the V6 model, with a deep, distant rumble that fills the cabin at high revs.

Inside, the Quattroporte feels plusher than the Ghibli too, with deeper front seats and a simpler, cleaner dash design that mixes high quality leather and wood trim, or (as in our test car) optional high gloss carbon fibre. It shares some features with the smaller car, like the large 8.3-inch touchscreen display and trademark oval clock mounted in the dash, but frustratingly the infotainment system is slow to respond, and already feels old.

For most buyers in this class, the deciding factors will be how it looks and the way the car drives, and the Quattroporte GTS won’t disappoint in either of these areas. In greasy conditions, there is more than enough grunt to overwhelm those wide rear tyres, and when the car starts to slide, the quick steering makes it easy to control. It’s not quite as agile as a Jaguar XJR, but the eight-speed auto box has the same smooth responses. 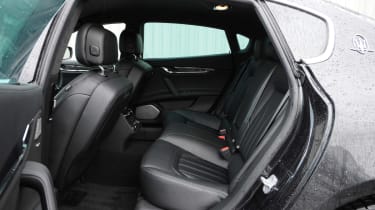 In full auto and I.C.E (efficiency + control) mode it can occasionally hunt around for the right gear, but it’s a massive step forward from its clunky predecessor.

Adaptive dampers are fitted as standard, and combine with the longer wheelbase to make the GTS more comfortable than the Ghibli on rough British roads. It’s not as refined or composed as the new Mercedes S63 AMG – but then very few cars are. Like the tuned Mercedes, buyers on the continent can opt for a 'Q4' four-wheel drive system for added security in tricky conditions, but the expensive and complex conversion to right-hand drive means Maserati are unlikely to offer this system to UK buyers any time soon.

The electric power steering doesn't give the driver a huge amount of feel, but its accurate and direct, and the eight-speed gearbox offers satisfyingly crisp changes that can be snapped into place with the gorgeous fixed aluminium shift paddles. Its more engaging than most big saloons on a tight road - but the step up in size over its predecessor does make it feel a bit unwieldy - but only if you try and drive quickly on really narrow roads.

Stretching the wheelbase by 107mm has at least had a dramatic impact on space for those in the back, with plenty of room to stretch out, even for very tall passengers. The 530-litre boot is the same as the S-Class too, so the GTS is no less practical than lesser models in the range.

Yet despite the turbocharging and the smaller V8 engine, running the GTS will still be an extremely expensive proposition. Forget the £108,160 asking price (which makes it more expensive than the likes of the Jaguar XJR and Panamera Turbo) and consider the fact that it sits in the highest tax bracket for CO2, emitting 274g/km.

So is the V8 GTS worth the £28,000 extra over the V6 Quattrporte S? Well, despite its rousing performance, we think it’s hard to justify – especially given the 23.7mpg official economy. At one point on our drive the trip computer was showing a combined 8.7mpg - scary figures for any owner to see.