We get behind the wheel of the all-new 405bhp Maserati Quattroporte S, ahead of its launch in July 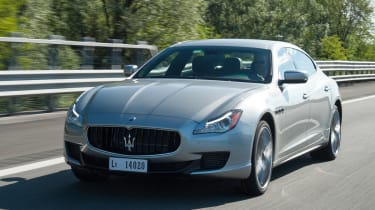 Some people will demand nothing less than eight cylinders, but for everyone else the twin-turbo V6 version of the Maserati Quattroporte makes so much more sense. It’s easily fast enough, sounds fantastic, is cheaper to run and costs a considerable £28,000 less – something even the wealthiest buyers will find difficult to ignore.

Downsizing often means compromising, but Maserati claims this isn’t the case with the new twin-turbo V6 version of the Quattroporte. Although this new S model has 120bhp less than the V8-powered GTS, it still goes from 0-62mph two-tenths faster than the old 4.7-litre V8 S, in a time of 5.1 seconds.

In fact, this engine is so powerful you wonder why anyone would need the V8 – especially when it costs £28,000 more. Drive the Quattroporte hard along a twisty road and you forget it’s more than five metres in length with enough room in the back for even the tallest VIP.

The steering might lack feel, but it’s sharp and accurate, and while there’s some initial roll when you first pitch the 1,860kg car into a corner it’s soon brought into check, especially with the Skyhook adaptive dampers in Sports mode.

This particular powertrain mode is the best way to enjoy the Quattroporte. It quickens the eight-speed auto’s shifts from 250 to 150 milliseconds, sharpens the throttle response and opens a valve in the exhaust. Now the engine sounds harder-edged under acceleration, and bangs and pops when decelerating.

You might also be disappointed if you compare the Quattroporte to a Mercedes S-Class for comfort, because while it deals with large bumps well, the Maserati fidgets over imperfections you’d never even know existed in the Merc.

The issue fades the faster you go, but at motorway speeds the exhaust emits a droning noise, which can become tiresome.

It’s things such as this, and the odd rough edge and skewed bit of trim, which remind you Maserati can’t match its key rivals for quality control. However, the gap has definitely narrowed.

And while the Quattroporte may not be quite as distinctive or tuneful as before, it’s going to be a lot easier to live with and is a third less thirsty on fuel. Most importantly, it still has far more charm than the austere Germans – even in downsized V6 guise.