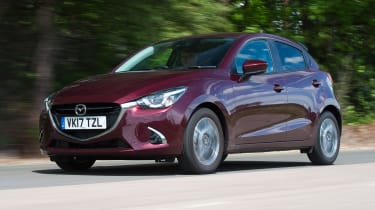 Mazda likes to think of itself as an honest car company, more interested in giving customers real-world fuel savings than focusing on spectacular results in the official economy cycles. That’s why its strategy is based around high-compression naturally-aspirated petrol engines rather than following the trend for downsizing and turbocharging.

As a result its engines aren’t the cleanest in the class, but they are pretty close. The entry-level 74bhp version of the 1.5 SKYACTIV-G petrol engine returns economy and CO2 emissions of 60.1mpg and 110g/km. Our pick and likely to be the most popular model is the 89bhp version, which returns 62.7mpg and 105g/km with the five-speed manual gearbox or 58.8mpg and 112g/km with the six-speed auto.

The range-topping 114bhp petrol is only available with a six-speed manual gearbox and returns 57.6mpg and 115g/km. Other superminis quote higher fuel economy figures – for example the petrol Fiesta EcoBoost does a claimed 65.7mpg. However Mazda reckons its larger capacity engines have a better chance of attaining ambitious claimed figures in the real world motoring – away from the test bench.

The Mazda 2 is a little more costly than some of its rivals to insure, as it ranges from group 13 for the entry-level petrol to group 16 for the top-end models. The Ford Fiesta doesn’t get beyond group 12, while the entry models start at group 3. Bigger engines and the potential for higher repair costs are to blame for the Mazda’s ratings.

The previous generation Mazda 2 did pretty well in the depreciation stakes, with best-performing cars losing 41 percent of their value over three years. The latest car is even better, with residual values ranging from 46 to 50 per cent – with the top prize going to the entry-level 74bhp car in SE-L trim.