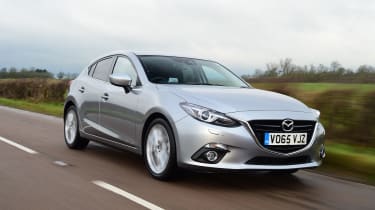 Adding the 1.5-litre diesel to the Mazda 3 range delivers a mixed bag of results. It’s not very quick, but some buyers will be happy to sacrifice power for lower CO2 emissions. However, specifying an auto box undoes some of the engine’s good work, while it’s pricey in Sport Nav trim. This engine makes more sense with a manual gearbox, as it dips below the 100g/km emissions barrier.

Until now, the only diesel you could specify in the Mazda 3 was the powerful 2.2-litre borrowed from the larger 6 saloon. While that engine delivered decent punch and economy, CO2 emissions of over 100g/km put it at a disadvantage against rivals. Now, though, the diesel line-up has expanded to include the smaller 1.5-litre, which was first introduced in the Mazda 2 supermini. 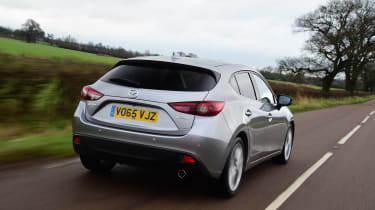 The new unit is available across the range, including in the well equipped Sport Nav flagship model tested here. The only visual clue to the smaller engine is that one of the holes in the rear bumper has been blanked off as there’s only one exhaust pipe; the 2.2 has a twin-exhaust set-up.

Fire it up, and while there’s a familiar diesel rattle, it’s well isolated from the cabin – and when the engine’s warm, you could easily mistake it for a petrol. It gets a bit more vocal under hard revs, but there’s enough sound insulation to ensure it’s never intrusive. With 104bhp, the 1.5 is slightly down on power compared to rivals like the Vauxhall Astra 1.6 CDTi and VW Golf 1.6 TDI (both with 109bhp), but it does have 270Nm of torque to help it along. 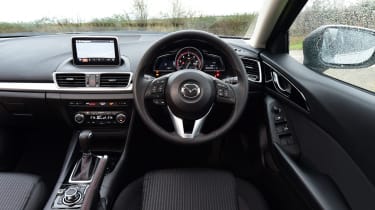 Combine this with the Japanese brand’s weight-saving measures, and the 3 is a reasonable performer off the line. However, the six-speed automatic box in our car is rather sluggish on upshifts, which blunts performance somewhat. It’s quicker to change down. And while there are steering wheel-mounted paddles, the crisp-shifting manual gearbox is far nicer to use.

One obvious difference between the 1.5-litre diesel and the 2.2 is the smaller unit’s lack of in-gear punch. It’s not great for overtaking, yet the reduced power means you can revel in trying to maintain momentum by carrying as much speed in corners as the Mazda’s agile chassis will allow. 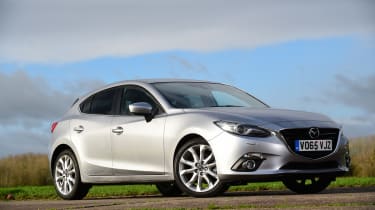 Of course, you’ll save money with the smaller engine, but adding the auto box cancels out some of the benefits, as it bumps CO2 emissions up from 99g/km to 114g/km. That places the car in the 20 per cent Benefit in Kind band for business users, which is only three per cent behind the better 2.2-litre auto. If you need a  self-shifter, that’s the one we’d go for.