No plans for a Mazda MX-5 Boxster beater 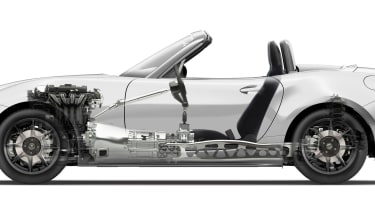 Speaking at the 2014 Paris Motor Show, Nobuhiro Yamamoto, programme manager for the Mazda MX-5, said there was no desire to push the two-seater sports car upmarket to compete with premium models like the Porsche Boxster or more focused cars such as the Lotus Elise.

He said: “There are five tenets for the MX-5. It must be rear-wheel drive and front-engined, compact and lightweight, have a 50:50 weight distribution, have a precise feel and be affordable.

“It’s very easy to use expensive materials, but it would not be in line with our customers’ expectations. [It would not be] affordable, which limits the scope of our customers to those who are very wealthy. It’s not the way the MX-5 should head."

Although no powertrain details have been revealed, bosses say the 1.5-litre unit will be joined by a naturally-aspirated 2.0-litre four-cylinder petrol engine. Thanks to a combination of reduced weight – the new car weighs around 1,050kg – and increased power, both the 1.5 and 2.0-litre models will outperform the 1.8 and 2.0-litre engines found in the current car. 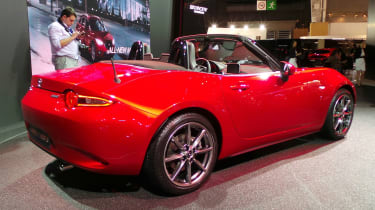 The new MX-5 will use an electric power-steering set-up for the first time. But in order to limit the relative lack of feel over a hydraulic system, the new car sees the power-steering mechanism mounted on the steering rack rather than on the steering column. According to Yamamoto, this allows the driver to benefit from all-important torsional feedback. “We are placing extra emphasis on steering feel,” he said. Despite being shorter than ever, with a reduced wheelbase and the engine mounted far back behind the front wheels, Mazda says the passenger compartment is the same size as that of the current car.

Will a Mazda MX-5 Roadster Coupe hard-top join the range?

The car will go on sale next summer as a soft-top roadster, but a hard-top Roadster Coupe version will be launched some time later. Although bosses remain tight-lipped, the hard-top model could feature substantially different styling. Yamamoto said whatever the final design, it would “supersede expectations”.

Kevin Rice, Mazda Europe’s creative director, said that the car’s taut styling hides far-reaching weight saving measures. The car’s new SkyActiv platform contributes the bulk of weight-saving, but features such as reducing the current car’s five wheelnut per wheel arrangement to four has assisted Mazda’s engineers in achieving a kerbweight of just over a tonne. Rice said the external aerial – an unusual feature in modern cars – was more to do with technical requirements for the audio system to work in all markets than a homage to past MX-5 models.

Welcome to our Paris Motor Show hub page. Scroll down for all our Paris content...
Greatest ever Mazda cars: classic and modern