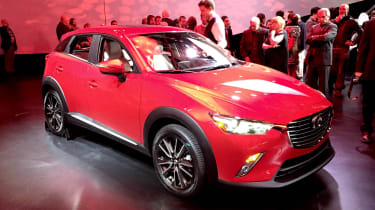 Mazda has pulled the wraps off the all-new CX-3 crossover, which is taking centre stage at the Los Angeles Motor Show this week. Billed as a rival for the Nissan Juke and Peugeot 2008, the CX-3 will go on sale in the middle of next year, priced from around £13,000, and is expected to be become the core model in the brand’s growing range.

The newcomer follows the recently launched 2 supermini as well as the MX-5 roadster, and slots beneath the CX-5 in Mazda’s SUV stable. It’s been penned using the same ‘Kodo’ design language, too, so it adopts the fluid styling, sculpted panels and familiar front end you’ll see on its bigger brother.

The compact crossover features trademark Mazda design cues, such as the chiselled bonnet and narrow LED headlamps, which merge with the chrome-wrapped front grille. A subtly rising waistline and sloping roof give the car a more coupe-like appearance.

The cabin features a host of tech and design elements you’ll also find on the latest generation of Mazdas. The dash layout is centred around the driver, like an MX-5’s, with a head-up display, larger central instrument binnacle and seven-inch floating infotainment system, operated by a swivel wheel on the centre console. Mazda’s in-car connectivity system – MZD Connect – allows passengers to access the Internet on the move, and includes features such as audio streaming and Bluetooth. 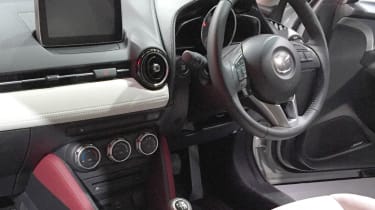 Under the skin, Mazda has based the CX-3 on its latest SkyActiv chassis tech, using running gear from the 3 hatchback and 2 supermini. Engine options at launch will include the all-new 104bhp 1.5-litre SkyActiv-D diesel, as well as 118bhp and 148bhp versions of the 2.0-litre SkyActiv-G petrol. Each engine can be paired with a six-speed manual or six-speed automatic box. Also to be introduced is a new all-wheel-drive system, featuring active torque control – first used on the larger CX-5 – which monitors front wheel slip and distributes power evenly to maximise traction. Suspension and steering upgrades have been made as well, in a bid to improve the car’s responses and deliver greater comfort.

In spite of being lightweight, the construction of the CX-3 also makes it incredibly safe, as 63 per cent of the body has been produced from high-strength steel and 29 per cent from ultra-high-strength steel. The body is engineered to absorb as much energy as possible during a collision, with armrests also specially designed to limit injuries to passengers. 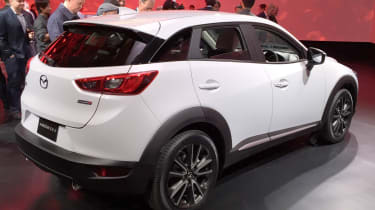 Alongside the CX-3 on Mazda’s stand in LA will be facelifted versions of the 6 saloon and CX-5. These two volume sellers will benefit from a host of mid-life changes, including upgraded interior trims and improved build quality in the same vein as the current 3 hatch and Fastback models.

Also present in LA will be a new 2.5-litre SkyActiv-G petrol engine, which is rumoured to develop around 300bhp.