We drive pre-production petrol version of Mazda’s mid-size SUV – but is it still the driver’s choice in its class? 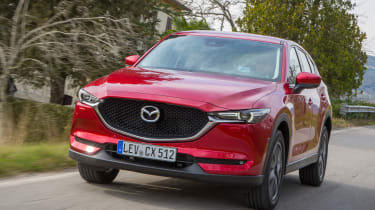 The 2017 Mazda CX-5 is a car of incremental improvements. It’s nicer inside and is more refined, while also offering more kit, more practicality and more style. If Mazda can get the pricing right it could be on to a winner, though our petrol car’s higher emissions mean it might not be the best choice for business users.

We’ve already driven Mazda’s new CX-5 SUV in 2.2 diesel 4x4 form and were impressed by the range of updates implemented by the Japanese brand. But with the negative spotlight shining on diesels of late, here we test a pre-production version of the 163bhp 2.0-litre petrol model to see if it’s a worthy alternative.

However, that also means claimed CO2 emissions aren’t quite as good as some of its competitors (or its predecessor, with 149g/km and 44.1mpg for this front-wheel drive six-speed manual model), but Mazda claims its engines deliver more impressive fuel economy under real driving conditions. 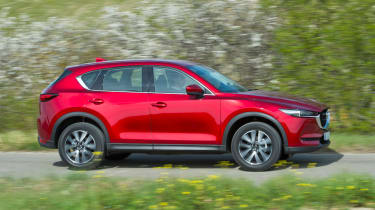 Out on the road the CX-5 is excellent. It’s always been one of the best cars in its class to drive, and nothing’s changed there. In fact, with more ultra-high-tensile steel in the chassis and strengthening elsewhere for the body – increasing rigidity by 15 per cent – it’s even better than before.

The steering is nicely weighted and pitched just right to make the most of the good level of grip on offer. Despite a small increase in weight over its equivalent petrol-powered predecessor, and measures to improve refinement, it still feels agile for an SUV.

There’s not much roll, which help the CX-5 corners fairly flat – but even on 19-inch wheels the suspension damps bumps and road undulations with finesse and control.

Part of the CX-5’s well-judged ride and handling balance comes from Mazda’s G-Vectoring system that monitors speed, throttle position and steering angle to slightly reduce engine torque when you turn-in – loading the nose and improving response.

The truth is, the subtly of the system and how slickly it’s integrated into the powertrain means you hardly feel it working, unlike some setups which use the brakes on rival models. It might be almost imperceptible, but it means the car feels very natural and sharp to drive.

With only 210Nm of torque produced at 4,000rpm, this petrol doesn’t have the grunt of the larger turbodiesel, but that’s no surprise. It means you’re forced to use more revs and hold onto a gear, where you’d usually shift up in the diesel. 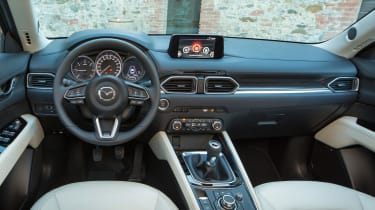 Rev it out and you’ll hit 0-62mph in 10.4 seconds, which isn’t particularly quick. But at least the 2.0-litre unit offers sweet throttle response. The six-speed manual transmission is well matched to the engine, too. As you have to extend it to extract the performance, the precise, mechanical shift action works in its favour.

That 163bhp maximum output is produced at 6,000rpm, where the engine is a bit coarser – but at lower revs and on the motorway the new CX-5 is nicely refined. Much more so than its predecessor, in fact.

It’s also more practical, as boot space has grown to 506 litres with 20 litres more under the floor. It’s roomy in the rear, with ample leg and headroom for six-foot-tall passengers, and the front of the cabin is slicker than ever, with plenty of soft-touch materials and a redesigned fascia featuring a slim horizontal bar to section off the upper and lower dash.

UK pricing and specification is yet to be revealed, but the trim range will consist of SE L Nav and Sport Nav models, while the addition of some extra equipment to each variant will see a marginal increase in price over the outgoing car. As a result, the new CX-5 is likely to start from around £24,000.