The new Mazda CX-8 is an impressive seven-seat SUV, it's just a shame it won't be coming to the UK 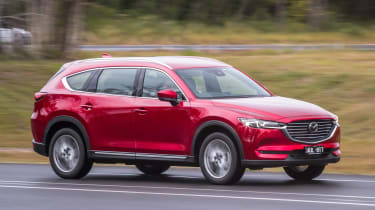 The Mazda CX-8 isn’t quite as rewarding to drive as the smaller CX-5, yet it compensates with superior practicality. There’s genuine space for adults in that third row, while folding the seats brings significantly more boot space. It’s just a pity the UK misses out on another of Mazda’s big SUVs.

Mazda hasn’t offered a seven-seater vehicle in the UK since the Mazda 5 MPV was dropped in 2015. So, you may be surprised to learn that on the other side of the world, Australian parents are spoilt with the choice of two.

The CX-8 SUV has just been released down-under – grabbed from Mazda’s home country of Japan as a slightly smaller, diesel-powered alternative to the petrol-only CX-9.

Where the CX-9 is a distinct model, the CX-8 is essentially a stretched CX-5. The front half of the vehicle, including the dash, is virtually identical to the mid-sized five-seater Mazda SUV we know here, though it gains a longer wheelbase (identical to the CX-9’s) and longer rear overhang to squeeze in an extra third row of seats. 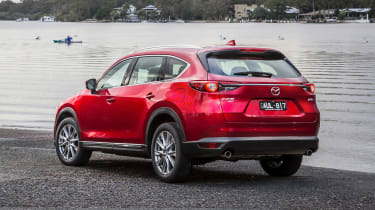 Those seats aren’t just for kids, either. There’s sufficient legroom for adults, while rear doors that open nearly 90 degrees and sliding second-row seats ensure getting in and out isn’t a clumsy affair.

The middle seats are more spacious, of course, even when they’re not slid to their rearmost position. Under-thigh support and headroom are both excellent, too. Storage isn’t an issue, thanks to a variety of solutions including an armrest that features two cupholders and a USB port.

Boot space is fairly restricted with all seats in place – but if only up to five seats are needed, folding the 50/50-split back seats liberates a sizeable 742 litres of cargo space. That would address one of the weaker points of the CX-5, which doesn’t lead the way for practicality in its segment.

The range-topping Mazda CX-8 Asaki we’re testing here comes with standard-fit Nappa leather seats. They are wonderfully supple and feature heating (as do the outer-second-row seats) and electric adjustment. This heightens the sense of cabin quality – an area where Mazda has been lifting its game of late.

The CX-8 Asaki sits on 19-inch alloy wheels, and gets LED lights front and rear. Inside, Mazda’s MZD Connect rotary controller features, though the 7.0-inch touchscreen that suits the CX-5 well seems undersized in the CX-8. 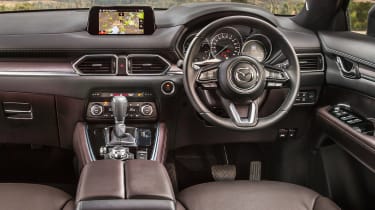 Perhaps inevitably, owing to its longer wheelbase and two-tonne mass, the CX-8 isn’t as entertaining to drive as its smaller sibling. The CX-8 is predictable rather than inspiring to drive, with steering that lacks the 5’s precision and directness.

There’s always a good flow to the way the CX-8 drives, though, courtesy of the suspension’s ability to cope with the kind of gnarly surfaces we’re familiar with in the UK – whether they’re urban streets or country roads.

Under the bonnet, you’ll find a tuned version of the CX-5’s 2.2-litre four-cylinder diesel engine. The most powerful UK car gets 173bhp, but the CX-8 boasts a superior 187bhp. It gets an extra 30Nm of torque, too. 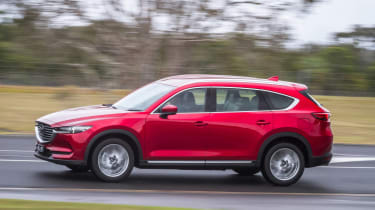 While it doesn’t inject the CX-8 with the same vim as in the much lighter CX-5, there’s good response from low revs and the general power delivery is smooth and progressive. It’s relatively quiet for a diesel, too, while its official fuel consumption puts it on par with rivals in this segment.

At current exchange rates, the CX-8 Asaki would cost around £34,500 in the UK, making it only slightly more expensive than a high-spec five-seat CX-5. That would also put it in the firing line of accomplished rivals like the Skoda Kodiaq and forthcoming seven-seat Honda CR-V. There are cheaper CX-8s available in Australia and New Zealand, though, including a variant that swaps all-wheel drive for front-wheel drive.

The CX-8 would make a worthy addition to the pint-sized CX-3 and mid-sized CX-5; it’s just a shame Mazda’s British SUV family doesn’t look set to grow any time soon.