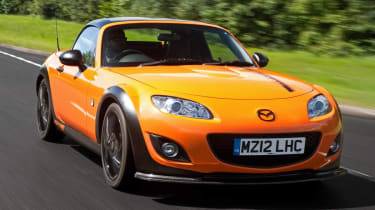 Jota Racing has worked its magic to produce the MX-5 GT, and in the process has transformed the fun-loving roadster into a focused sports car. Mazda needs to build this car - if only so everybody can experience that exhaust note alone.

Over the years there have been dozens of special edition Mazda MX-5s. On the whole they have been largely cosmetic exercises, with exclusive colours, special wheels or extra trim inside, but no boost in power. But Mazda's next MX-5 special goes that one step further.

In celebration of the MX-5's entry in the British GT4 championship, Mazda commissioned Jota Racing - the team behind the race MX-5 - to build a special version of the roadster. And if enough people express an interest in the car Jota has built, then Mazda will put it into production.

The new car is the Mazda MX-5 GT, and it's more than just some racing stripes and one-off orange bodywork. It's based on the top-spec MX-5 Roadster Coupe, and as well as 18-inch wheels from the MX-5 Black special edition, the GT has been lowered to give it a sportier look. A carbon fibre front splitter has also been added, plus side skirts and a bootlip spoiler at the rear, also in carbon fibre. Inside, there's Alcantara on the seats, handbrake and gearlever gaiter, a carbon fibre dash insert, and neat red rings on the air vents, too.

But it's under the bonnet where the most important changes have been made. The standard 2.0-litre engine has been tuned to give 205bhp with the fitting of a sports exhaust and a remapped ECU. Many people have cried out for more power from Mazda's roadster - so have the updates done the MX-5 justice?

In a word, yes. Power delivery at low revs is much the same as a standard MX-5, but get past 2,000rpm and there's a surge all the way to the raised rev limit of 7,800rpm. What's more, the sports exhaust has a hard, raspy edge to it, which simply encourages you to aim for the redline in every gear.

Turn into a corner, and the MX-5 GT responds sharply, much like the standard car, but with far less body roll. Exit a bend, and you can get straight back on the throttle without worry, as the MX-5 copes easily with the extra power.

The payoff for this improved cornering ability is a stiffer ride, but it's still tolerable, with only the biggest bumps in the road proving uncomfortable.

The Mazda MX-5 GT is a sharper, more focused roadster - the only problem is that it's not scheduled for production. But that's where the public can make a difference. If response to this one-off special is positive, we can expect a limited run of cars to be produced soon.