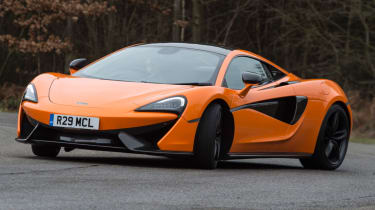 A two-seater supercar is hardly a practical choice, but there’s no doubt the McLaren 570S is better than some. Of course it’s not going to compete with the cabin space of a Porsche 911 with its 2+2 seating, but compared to an Audi R8 or Lamborghini Huracan the McLaren fares pretty well.

It’s not just the size of luggage space that makes the 570S a practical option, it’s also remarkably easy to drive, with a terrific view out over the low dashboard. The ride comfort is significantly better than the performance figures might suggest, too.

The 570S is pretty roomy for a two-seat supercar, and most drivers will find plenty of leg and headroom. There’s also plenty of adjustment for the driving seat and steering wheel, so you’ll easily find the right driving position. Just make sure you save your desired setup in the memory function – as it’ll default to an old setting if you’re not careful.

The McLaren’s boot space is unsurprisingly a bit on the tight side, but look under the bonnet and you’ll find 144 litres of luggage space at the front of the car, which is roughly the same as a Lamborghini Huracan. There’s space for oddments inside the car, but no glovebox. A 570GT is more practical, with a small, side-hinged boot behind the front seats.