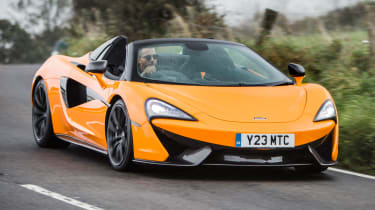 Sports cars don't get much better than the McLaren 570S, and the Spider version adds that extra element of enjoyment to the formula. There's no real penalty for having the ability to take the roof down, apart from the extra cost and a slight loss of refinement. It's one of the best driver's cars out there, looks great and is still comfortable on British roads.

McLaren might not be dominating the Formula One grid this year, but the brand's road car division is going from strength to strength. With the latest Sports Series models such as the 570S and 570GT being joined by the Super Series 720S model this year, and the P1 already enjoying icon status, McLaren is becoming a huge hitter at the top end of the car market.

Now, the brand is introducing the next Sports Series model into its range, the 570S Spider. It's the company's lowest-priced convertible model, but at £164,750 it actually rivals the cars at the very top of other brands' ranges, including the Audi R8 V10 Spyder. It's easy to tell where this convertible McLaren competes just by looking at it - the complex curves and lines mean it's more eye-catching than the Audi, though perhaps a bit less subtle.

The way it looks is in part down to what’s at the core of the car, a MonoCell carbon fibre chassis that's shared with the other 570 models. It's light but extremely strong, so the only extra weight over the Coupe version is the weight of the roof mechanism (46kg). That's a crucial point for the Spider model, as it means the car feels just as composed and impressive on the road as its fixed-roof sibling.

You get the same 3.8-litre twin-turbo V8 with 562bhp and 600Nm of torque too, and the only difference in the performance figures is that the Spider takes one tenth of a second longer to go from 0-124mph than the Coupe - but as it only takes 9.6 seconds in total the car is hardly wanting for accelerative power. The 0-62mph time of 3.2 seconds is identical to the Coupe’s - this car really is blisteringly fast by any standard.

The V8 engine isn't as characterful as the best supercar engines, such as the Audi R8's V10, but with maximum power of 562bhp arriving at 7,500rpm, it's hardly a disappointment. Thanks to the two turbochargers, it's an incredibly flexible unit that can be left in gear as you wind through a series of corners, never wanting for more power - but if you want to shift down and hit the top end, it's properly exciting and the soundtrack is appropriately ferocious. 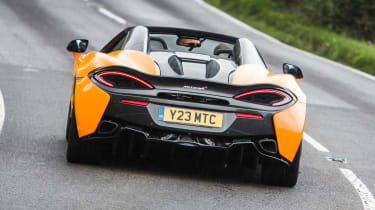 There's even a small rear window you can open to hear more of the exhaust note with the roof up - we found that a fun feature on a very wet section of our test drive, where we had to put the roof up. You can drive up to 25mph while you're opening or closing the roof, useful in traffic, and it takes 15 seconds to do so. With the roof down there's little wind buffeting, and the refinement with the roof up is nearly as good as in the Coupe.

Even without extra chassis strengthening, the magic of that carbon fibre tub is clear in the 570S Spider. It remains one of the best drivers' cars out there, but also genuinely well set-up for patchy British tarmac. In Normal mode, which joins Sport and Track modes on the centre console controls, the McLaren soaks up bumps in the road surface admirably - but even in Sport mode it's useable on the road, as it firms up without feeling like it's bouncing off imperfections.

Even though a fast corner, the chassis absorbs bumps in the road well enough that the car doesn't lose its composure - but there's still almost no roll in the body as it does so. It's this chassis set-up that really makes the McLaren feel special, as it achieves that rare balance between precision and compliance in the way it drives. 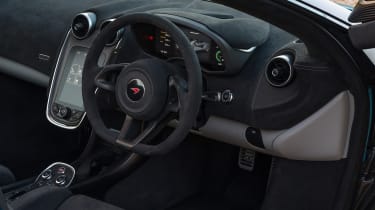 Just as impressive is the electro-hydraulically assisted steering, which is as good as it gets for an assisted system. You can feel the front wheels' movements on the road surface with a light touch of the rim, but as the wheel doesn't flick or grab at you, it gives a huge sense of confidence in the nose of the car. With the incredible grip from the front end, you can really lean into a corner and enjoy the feedback through the steering as well as from the chassis beneath you.

The wheel is quite thin and is trimmed with Alcantara, which means you don't feel like you need to grab on to it to keep control. Plus the huge paddle shifters are well placed and have a satisfying action - they're connected, so pushing one in moves the other in the opposite direction. It's a small touch but helps the car feel that bit more mechanical and involving.

The gearbox itself is a match for the engine in terms of speed, though when you're not driving quickly there's an occasional shunt through the powertrain as you shift. It's responsive enough to use in manual mode most of the time, but auto mode works well enough to rely on as well.

Another thing you'll notice in the McLaren compared to many modern sports car is the brake pedal feel, which is superb. You need to put on plenty of pressure, but because there's more movement and effort needed, it makes the whole process more involving, and almost as enjoyable as getting back on the gas pedal. 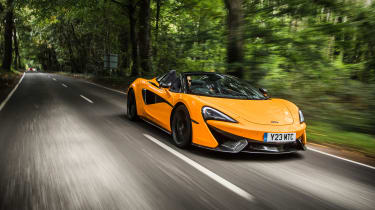 Plus, the small pillars and great forward visibility mean the car is easy to place in your lane, though it retains the low driving position key to any good sports car. McLaren has done its best to make this into a useable car, and the comfortable ride isn't the only thing that helps - there are low sills to help you get in more easily and loads of adjustment for the driver's seat and steering wheel.

Then there's the 150-litre load space in the nose of the car, joined by a 52-litre space behind the cabin - enough for a weekend trip. The cabin feels spacious, as there's no large centre console getting in the way, and the seats are very comfortable too. The cabin also feels suitably luxurious with its high-quality leather and Alcantara.

Our 570S Spider was fitted with a raft of options taking it well over the £164,750 base price - including £3,560 paint job, a £3,370 sports exhaust and a £4,090 Security pack featuring a reversing camera, parking sensors and nose lift for those tricky speed bumps. Those prices are eye-popping, but relative to the cost of the car it's no wonder they're so expensive - and they are worthwhile options if you're buying a 570S Spider.