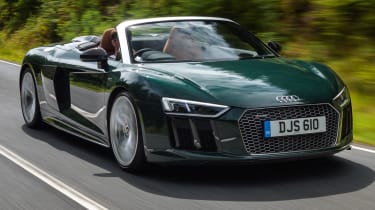 The Audi R8 Spyder V10 plus adds another dimension to the German supercar’s breadth of talents. Many potential buyers will consider the more potent 602bhp engine worthy of the premium on its own, while being able to remove the roof only enhances its desirability. The plus is not without fault, but the positives far outweigh the negatives. It’s an individual choice due to that non-turbo engine, and all the better for it.

Until recently, the Audi R8 Spyder played second fiddle to the Coupé in the performance stakes – as the roofless R8 was only available with a 533bhp version of the firm’s 5.2-litre V10. However, with the new R8 Spyder V10 plus, Audi has added this 602bhp option to the line-up.

And what better place to start a review of this car than with the engine? It defines the car. It’s glorious. In an age where many supercars are turning to turbos, the R8 is one of the last bastions of the wonderful, high-revving, naturally aspirated engine.

The 5.2-litre V10 ramps up noticeably towards its power peak at an addictive 8,250rpm, and while you have to work harder to extract the performance than in a McLaren 570S Spider, with 560Nm of torque, it’s not exactly lacking in grunt. 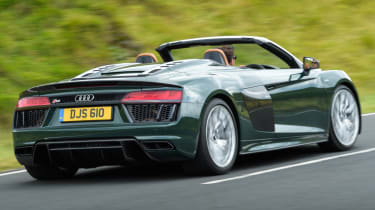 What the McLaren can’t hope to match is the Audi’s vocal range. The V10 gargles into life and settles to a busy idle; squeeze the throttle in any gear and the instant response goads you into holding on to the revs as the motor crescendos with a melodious wail towards its rev limiter. Pull the right-hand paddle and the seven-speed gearbox initiates an almost imperceptible shift as the engine demands to be revved again.

In the Spyder there’s an even stronger connection to that stunning V10. You can lower the glass partition into the bulkhead behind you to let more of that characterful sonic signature into the cabin. It doesn’t impact refinement much, either.

Weather permitting, it’s best to drop the electrically operated fabric roof entirely, which is possible in 20 seconds at speeds of up to 31mph. Now, in Dynamic mode, the crackle on the overrun and more raucous scream will induce an even wider grin. Car companies talk a lot about emotion, but the R8 Spyder V10 plus nails it. 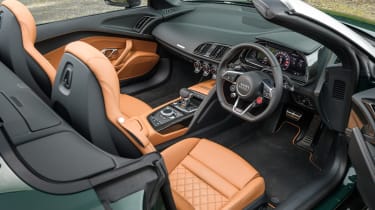 However, in other ways it’s still lacking, as the R8 isn’t a car without flaws. The light steering lacks feedback, for example, even if the cornering grip on offer is brilliant.

The plus is 25kg lighter than its standard Spyder sibling, while Audi claims the mixed material chassis that uses aluminium and carbon fibre-reinforced plastic extensively boasts “unsurpassed rigidity”, thanks to strengthening around the sills, A-pillars and windscreen frame. There’s not much wobble from the structure, even on roads that would have a hatchback’s interior rattling. This is impressive given the car is conventionally constructed, rather than being made entirely of strong-but-light carbon fibre.

With quattro four-wheel drive, traction on dry roads is unbreakable, while in the wet you can feel the system subtly shifting the torque between front and rear axles to keep you straight and stable. If you’ve got any lock on you might get a faint sense of the steering tightening up as the front driveshafts distribute some power, but the benefits at this time of year are obvious – especially in the wet. Combined with launch control it means the R8 Spyder V10 plus will accelerate from 0-62mph in just 3.3 seconds and hit 204mph flat-out.

Our car wasn’t fitted with the £1,600 Magnetic Ride adaptive dampers, so over gnarly roads it felt less settled than its main McLaren rival. Where the 570S’s damping flows, the R8 skips and hops – not badly, but combined with the less transparent steering, it doesn’t instil the same level of confidence. 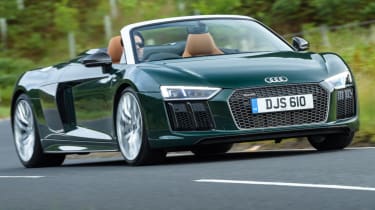 The R8 Spyder is still an exquisite machine. Features such as the 12.3-inch Virtual Cockpit display and carbon fibre trim dotted around the cabin make it feel special. Forget the misconception that this is just a big, expensive Audi TT; it’s a totally different product with a totally different character.

Refinement with the roof up is good, and tyre noise isn’t too bad on standard 19-inch wheels (the car in our pictures has the optional 20s). Carried over from elsewhere in the range, the infotainment works seamlessly, and there’s a 112-litre boot under the vast front clamshell – that’s enough for two weekend bags.

You could use it every day, then. But this is a 602bhp supercar, so if you’re worried about efficiency then you’ll need to look elsewhere. Audi claims 22.6mpg and 292g/km of CO2. Instead, focus on that rip-roaring plus-spec engine, the slick gearbox and the capability of the all-wheel-drive chassis – plus the extra dimension added by the folding soft top – and you’ll have got to the nub of what this car is about.