The £185,500 McLaren 600LT becomes the most powerful Sports Series model to date with a whopping 592bhp 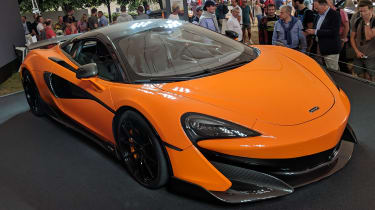 The McLaren 600LT is the fifth and most powerful model to be added to the British brand’s Sports Series range. It will be hand-built in limited numbers and cost from £185,500.

McLaren’s LT sub-brand, short for Longtail, is reserved for only the company’s most extreme models. Only four cars have carried the badge, starting with the McLaren F1 GTR racer in 1996.

The 600LT adopts the 675LT’s mantra of more power, less weight and optimized aerodynamics. Under the skin the car is based on the 570S coupe but McLaren claims almost 25 per cent of the car’s parts are new or redeveloped. 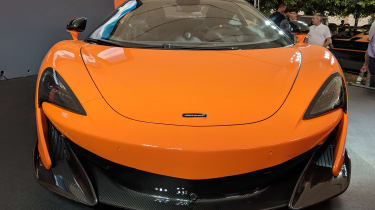 The bespoke carbon fibre bodywork is the most obvious change over the standard model; the body itself has been stretched by 74mm thanks to a unique carbon fibre roof, front splitter, side skirts and extended rear diffuser. Along with a fixed rear wing, the changes allow the 600LT to produce 100kg of downforce at 155mph.

Changes continue inside where McLaren has fitted carbon fibre racing seats from the P1. Trimmed in Alcantara, they save 21kg relative to the items fitted to the 570S, though buyers can go one step - and £4,990 - further and spec even lighter carbon fibre seats borrowed from the Senna. A lack of carpets sheds 5.7kg, and the exclusion of air con, satellite navigation and hi-fi help trim the overall mass further - though all three are still available as no-cost options.

Like all of McLaren’s road cars, the 600LT is powered by the brand’s twin-turbocharged V8 engine. The combination of a revised engine management system and a back pressure-reducing top-exit exhaust results in peak outputs of 592bhp and 620Nm of torque - 30bhp and 20Nm more than the 570S. The result is a 0-62mph time of 2.9 seconds, 0-124mph in 8.2 seconds and a top speed of 204mph.

Chassis tech from McLaren’s Super Series model, the 720S, has also been adopted and developed for the 600LT; forged aluminium double-wishbone suspension - which carry a 10.2kg saving - carbon ceramic brakes, stiffer engine mounts and Pirelli Trofeo R tyres are all designed to bring better ‘track focused dynamics.’ The brakes themselves save another four kilos, and allow the 600LT to halt from 124-0mph in 117m - that’s within a metre of the P1.

The British firm claims that the overall weight saving results in a substantial 96kg weight saving relative to a standard 570S; without fluids the car tips the scales at 1,247kg – or another 150kg or so with a driver and fluids on board. 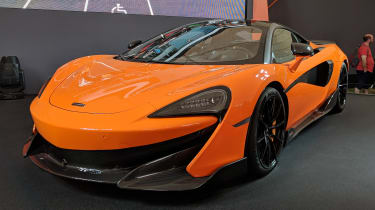 McLaren hasn’t confirmed how many 600LT models will be produced, but numbers will be extremely limited due to the specialist tooling required to shape its unique body panels. Only 500 examples of the 675LT coupe were produced, followed by 500 examples of a 675LT Spider, so expect similar numbers for the 600LT.

The 600LT has made its dynamic debut at the Goodwood Festival of Speed on Thursday 12 July.

Click here for all the latest from the 2018 Goodwood Festival of Speed... 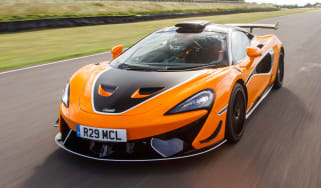