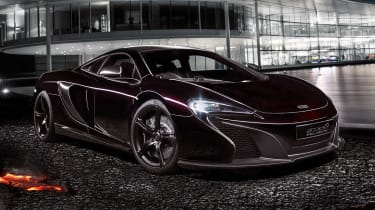 This is the MSO 650S Coupe Concept, designed by McLaren’s Special Operations division to showcase bespoke upgrades available to owners of the new 650S.

These MSO-branded door blades are more aggressive versions of those found on the 650S, featuring a satin finish to increase airflow along the bodywork edges.

Satin has also been used to similar effect on the engine covers and to finish all carbon fibre parts. 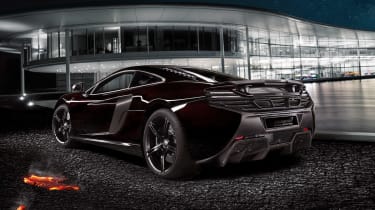 At the rear, carbon fibre is used heavily throughout the GT3-inspired bumper, helping reduce the weight of both the airbrake and unique MSO diffuser.

Helping the MSO 650S Coupe Concept stand out further is the ‘Agrigan Black’ metallic black paint scheme. This is an in-house development that incorporates a deep ruby red flake, which McLaren claims will change colour dramatically in direct sunlight and contrast with the satin-finished carbon fibre.

Inside, MSO has added fixed-back carbon fibre racing seats based on those found in the McLaren P1. These are finished in carbon black leather and offer a lower and more supportive seating position, as well as saving 15kg of weight.

Satin is once again used to finish the carbon fibre throughout the cabin, contrasted in the cabin by gloss black details.

Although these updates have been developed with the 650S Coupe and Spider in mind, McLaren has confirmed many of the improvements can be fitted to the outgoing 12C – in keeping with the Woking-based manufacturer’s recent empahsis on not limiting vehicle developments to new customers.

However, unlike the free Technology Upgrade offer, the MSO-engineered packages will come at a price. Available to order from McLaren dealers now, the side blades are priced at £5,114 for the 650S, while the rear diffuser is on sale for £7,245.

As for the MSO 650S Coupe Concept, there are currently no plans to put the design study into production, although McLaren Special Operations is monitoring potential interest from customers.