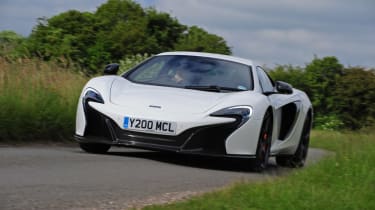 The McLaren 650S is one of the quickest and most capable cars on the road today, making it more than worth its £200,000 price tag. It strikes a perfect balance between the day-to-day usability of a Porsche 911 and the fun of a Ferrari. It’s a British supercar that can really take on the best in the world.

If you’re not one of the 375 lucky punters who bought a P1, then the McLaren 650S – which features tech and styling inspired by that car – makes for a pretty compelling alternative.

The P1-style front end isn’t only for show, either. The 650S gets bigger radiators and side vents to help cool the engine more effectively, and the carbon front splitter generates 40 per cent more downforce above 150mph.

From behind the wheel it’s difficult to imagine a car faster than this. The 3.8-litre twin-turbo V8 delivers everything it’s got shortly after you floor the throttle, and depending on your outlook it’s either terrifyingly quick or endlessly exhilarating. From a standing start, the 650S will cover 0-100mph in 5.7 seconds – the same time it takes a Porsche Cayman to do 0-62mph.

The engine hurtles towards the 9,000rpm red line so fast that the tacho needle struggles to keep up. However, you’d need to be at a race track to really appreciate the new level of performance the 650S has to offer. Corners rush up in a blur of noise, but through a series of challenging bends you can feel the effect of the tweaks to the suspension set-up. 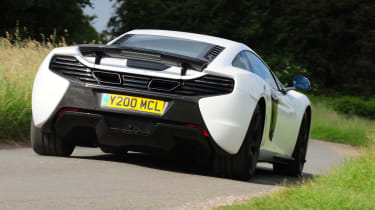 McLaren has upped the stiffness of the suspension to help the 650S feel a fraction crisper through bends than the 12C. You can throw it into a tight corner fully expecting it to understeer, but the 650S just continues to grip. There’s a surprising amount of traction, too, so getting on the power early isn’t just going to send you in to a spin.

You might find a Ferrari 458 Speciale just that little bit more involving, but we reckon the McLaren would be quicker point-to-point and more comfortable too. A set of carbon-ceramic brakes now comes as standard and is great when you’re driving hard. Around town, though, you need to be firm on the pedal.

If you’re not concentrating while sitting in traffic, you can find yourself edging forwards as the engine overcomes the brakes. It’s a similar story with the seven-speed dual-clutch gearbox, which is perfect at speed, but can hold gears too long or change up unexpectedly at city speeds. 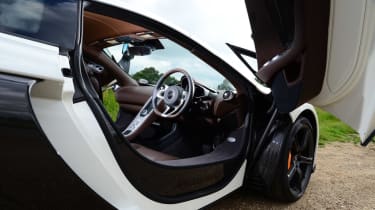 But this McLaren is still surprisingly comfortable, with a high quality interior and a near-perfect driving position – its looks will draw more attention than almost anything else on the road too.

The elegant, simple cabin now has Alcantara trim, and there’s an extra-cost retractable wheel to make climbing in and out of the cockpit easier. There’s also a reversing camera, and fixed-back carbon fibre bucket seats based on those in the P1 hypercar are a must-have option.

Visibility is fantastic for a supercar, and the clarity of the driving environment – with a gorgeous, unadorned steering wheel – makes it easier to live with than you’d expect.