125 years of Mercedes motorsport: the cars and the stars

From supplying engines in the first motor race, to its current F1 domination, Mercedes has had plenty to celebrate in its 125-year history 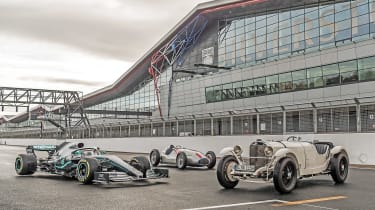 Mercedes’ recent triumphs in Formula One are unlikely to have escaped your notice, but have you ever wondered why the team’s cars are called The Silver Arrows? The German brand are set to celebrate 125 years in motorsport at its home Grand Prix at Hockenheim this weekend, but the story dates back to 1934 and uncovering its origins offers a fascinating insight into the firm’s racing heritage.

In a move to prevent an engine arms race, which saw capacities ever-increasing as the manufacturers hunted for more power, rules were introduced stipulating that GP cars must weigh no more than 750kg. Mercedes turned up to scrutineering at the Nürburgring in its new W25 and, rather inconveniently, it tipped the scales at 751kg.

Opinion: 'Formula E is the future of motorsport, not Formula 1'

After a little head-scratching from the brand’s engineers, a solution was reached: the white lead-based paint – white was the national motorsport colour of Germany at the time – would be sanded away. One ingenious bodge job later, the car made the required weight. It flaunted a shiny aluminium finish on the way to a debut victory, the nickname ‘Silver Arrow’ was created, and it has stuck ever since.

The irony of this tale is that the latest Mercedes-AMG Formula 1 racers are meticulously crafted from carbon fibre – and are therefore mostly black – so need a lick of silver paint to maintain the traditional look. But the extra coat of paint (incidentally, a special lightweight shade of silver had to be developed at great cost) hasn’t stopped the team demolishing almost every motorsport record in its path. 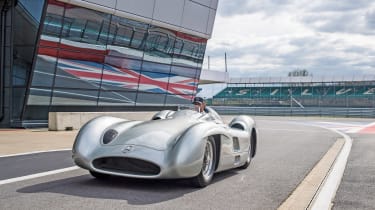 Few teams have experienced dominance like Mercedes-AMG Petronas F1 Team, to give it its full title, in the history of the sport. Since the change to V6 turbocharged hybrid rules in 2014, the outfit has won every single driver’s and manufacturer’s Formula One world championship.

But this isn’t a new phenomenon – just the latest chapter of a long, decorated passage of the company’s success in motorsport. In addition to race wins and titles for McLaren and Brawn GP in F1, the three-pointed star has won the Le Mans 24-Hour race twice (once on its own, another as an engine supplier for Sauber), FIA GT World Championships, and other endurance victories. It’s the most successful name in the German DTM touring car series, with as many race wins and titles as BMW and Audi combined. We could go on.

Meeting the cars and the stars at Silverstone

This year marks the 125th anniversary of Mercedes’ participation in motor racing, and Auto Express was invited to Silverstone to see some of its stunning cars, and meet the superstars who drove – and still drive – them.

The Silverstone Wing, the which houses the pit complex for contemporary F1 races, is filled with legendary machines for the celebration. The modern surroundings are in stark contrast to the birth of the brand’s motorsport life. A tall, skinny twin-cylinder engine dating back to 1894 might not have the instant draw of Lewis Hamilton’s 2018 title-winning EQ Power+ sitting nearby, but its significance is arguably greater. Nine of the 15 finishers in the world’s first motor race, run between Paris and Rouen, used a version of this 3bhp Daimler engine design (produced under licence by Panhard-Levassor). It’s the start of a history littered with fascinating stories, all of which are proudly on display. 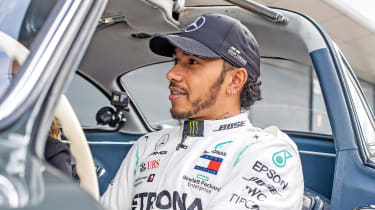 Take the 1994 Penske-Mercedes PC 23, which saw Mercedes use a loophole in the Indianapolis 500 rules to devastating effect. An old rule for the iconic race allowed less-advanced pushrod engines a break in displacement and turbo boost compared with more advanced powerplants. This was originally intended to allow smaller engine-builders to compete in America’s greatest motorsport event, but Mercedes chose to develop a 3.4-litre turbocharged unit. The result? A total of 1,024bhp meant 150-200bhp more than rival cars. It allowed the Penskes to dominate; the team locked out the front row in qualifying, and Al Unser Jr won, with just one other driver on the lead lap. Barely 30 minutes after the race, the rules were changed to end the loophole.

Then there’s the McLaren MP4/13, the car that guided Mika Häkkinen to the first of his two Formula 1 titles. Or the Mercedes-Benz SLS AMG GT3, which won the Nürburgring 24 Hours in 2013, a year in which the SLS also triumphed at the 24-hour races of Spa and Dubai, plus the 12 Hours of Bathurst. But all of these cars were static displays. The real fun was happening just below, where some of the firm’s other greatest hits were being driven in anger. It doesn’t take long to get the feeling that Mercedes’ driving legends past and present are having an even better time than we are. It’d be hard not to, given that Silverstone has become their private playground for the weekend.

“It was great fun for me to drive all these cars,” says Valterri Bottas, with a huge grin on his face. “Very few people in the world even get to touch these cars, so I’m a lucky man.” The man giving Lewis Hamilton a hard time in this year’s F1 season jumps into a modern C 63 DTM car, before driving a beautiful W125 Silver Arrow from 1937 – and he is pushing both models to their very limits.

His team-mate is enjoying himself, too: five-time F1 champ Hamilton spots an opportunity for an impromptu race with his boss in a pair of 190 DTM machines, although he lets Toto Wolff have the full-blown race-prepped version.

The 190 DTM was a car which, back in the day, made the name of another Mercedes legend; for Bernd Schnieder has been in the brand’s family for almost 30 years. His accolades include five DTM crowns between 1995 and 2006, an FIA GT championship title in 1997, two Nürburgring 24-hours wins, and he played a part in every 2013 SLS endurance victory.

We sidle up beside him in the 1928 SSK. The supercharged 7.1-litre straight-six pumps out around 300bhp and 680Nm of torque through a four-speed gearbox. “It’s not quite so easy to drive because the pedals are in a different position,” says Bernd. “The accelerator is in the middle, the brake pedal is on the right hand side, so you have to get used to that!” He roars out onto Silverstone’s Stowe circuit, giving everything the priceless relic has got. Out of the car, Bernd’s enthused about the event. “It feels absolutely awesome. As a German driving for the big star, it’s really special and I’m really proud of being with the family for nearly 30 years now.” 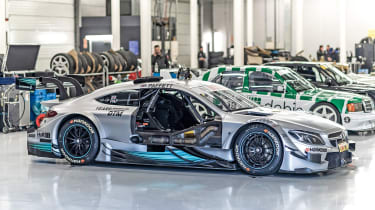 The SSK isn’t the oldest moving exhibit, though. We next hitch a lift in the 1904 simplex, a ludicrously complicated car to drive by modern standards. There are five pedals for a start, plus various levers, wheels, and a series of little vials along the dashboard that allow the navigator to monitor oil pressures and levels. Our chauffeur was ex-DTM racer Roland Asch, who gave a little toot on the horn as Valterri Bottas passed us in a priceless 300 SL Gullwing.

The SL was next up for us, now driven by current GT star Maro Engel. “If you had one of these back in the fifties, you were the boss!” says Maro. In fairness, the same probably applies today. Ex-McLaren F1 racer Stoffel Vandoorne now competes for the Mercedes-backed HWA team in Formula E, and he refamiliarises himself with combustion power by treating us to a run out in a rally-prepared 1980 500 SL.

And Vandoorne is a part of what could become Mercedes’ next exciting direction in motorsport. The brand has already dipped its toes into Formula E for season five with the HWA team, but a full-on factory assault will follow next year. In the meantime, the firm’s dominant F1 run continues, with a record-breaking five straight one-two finishes kicking off the 2019 season. We wouldn’t be surprised to see the Silver Arrows fighting at the top of yet another racing discipline – just as long as they make sure to not lay the paint on too thickly.

What's your favourite car from 125 years of Mercedes' motorsport history? Let us know below...