Full story on the new 355bhp Mercedes A45 AMG, following its debut at the Geneva Motor Show 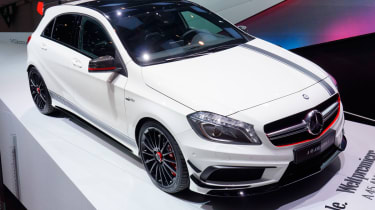 Mercedes has revealed the A45 AMG, a 355bhp hot hatch with the punch to beat a Porsche 911 away from the lights, but for half the price.

Unlike all the other AMG models, which currently use either a V8 or V12, the new A45 AMG has a four-cylinder 2.0-litre turbo. The 355bhp engine boasts the highest horsepower-per-litre figure of any production car, and is hand-built by AMG.

The car also features a new AMG 4Matic four-wheel-drive system and a seven-speed automatic transmission, and rockets from 0-62mph in just 4.6 seconds. That’s half a second quicker than the manual BMW M135i hatchback and only a tenth slower than the C63 AMG.

But while the performance may be a match for the 6.3-litre V8 C-Class, AMG models are just as much about noise as they are acceleration. A turbocharged four-cylinder isn’t naturally the most tuneful of engines, but Mercedes has fitted an AMG sports exhaust to help create some aural drama.

The A45 AMG also comes with new sports suspension and speed-sensitive AMG steering to help improve handling, and the ESP system can be switched between three modes: On, Sport and Off. There’s a Curve Dynamic Assist mode, too, which can brake individual wheels to reduce understeer.

AMG’s new trademark two-bar grille is one tweak differentiating the A45 from a standard A-Class. There’s also a chunky bodykit, a rear diffuser, some lightweight alloys and two chrome-plated exhausts. The interior gets sports seats finished in faux-leather, with red stitching. There are red seatbelts, too, and red highlights on all the air vents.

Mercedes will also offer a range of styling and performance upgrades. Among them is an aerodynamics package with a large rear spoiler and a bigger front splitter. There’s firmer AMG Performance suspension, too.

Despite the supercar-rivalling performance, Mercedes claims impressive economy of 40.9mpg and CO2 emissions of 161g/km – that’s a huge improvement on the 23.5mpg and 280g/km of CO2 claimed by the C63 AMG.

The A45 AMG will be available to order shortly and should cost around £36,000.