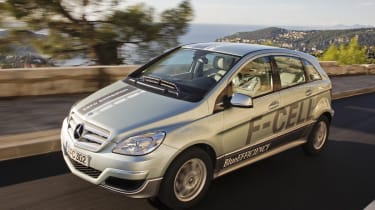 The F-Cell is a fascinating insight into the cars Mercedes says we could all be driving in the near future. And if that’s the case, there’s plenty to look forward to. As well as being smartly engineered, this special B-Class possesses all the advantages of conventional petrol and electric cars in one viable and enjoyable package.

There have been plenty of concept cars that promise to combine the zero emissions of an electric car with the convenience and range of a petrol vehicle, but until now few of them have been ready for the road.

The Mercedes B-Class F-Cell plans to change all of that. It goes on trial early next year, with 200 examples being leased to customers. Externally, the F-Cell is identical to a standard B-Class, even down to the exhaust pipe. There’s little evidence that anything is different when you get inside, either. But turn the ignition key, and things soon change. Rather than the familiar mechanical hum of an engine, the only evidence of life comes from a gauge which flicks on to indicate that the system is ready to go.

Slip the automatic gear selector into drive, and the F-Cell pulls away in silence. Mercedes claims that the 100kW motor delivers the equivalent of 136bhp, which gives the car similar pace to a 2.0-litre petrol model. In reality, the instant torque from a standstill makes the F-Cell feel even quicker off the line. As speed rises, the silence is broken by an unobtrusive turbine-like whirr from the system.

A downside to the new drivetrain is that it increases the car’s kerbweight by 300kg, so firmer suspension has been fitted to cope. A low centre of gravity ensures that it feels stable in corners, though.

Overall, the way the F-Cell drives is reassuringly conventional. But the biggest bonuses of the hydrogen fuel cell are its range and refuelling time. While most electric cars run flat after around 100 miles and require an overnight charge, the F-Cell has a range of about 250 miles, while filling the tank with four kilograms of hydrogen gas takes just over three minutes. If the fuel is produced from renewable sources, the B-Class F-Cell is a true zero-emissions car, and one of the first to be viable over longer distances.