Sleek two-door looks great, but does it deliver on road? 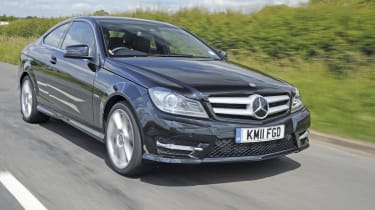 The C-Class Coupé looks great, but the driving experience isn’t quite as sporty as the styling suggests – making it a more grown-up alternative to BMW’s 3-Series Coupé. The diesel engine could do with being smoother, but it’s an extremely comfortable and capable car. The only problem is the saloon drives nearly as sharply and seats five, for £1,600 less. Our advice would be to look at one of the petrol options for their added refinement and lower price.

Looking for extra style and sportiness? Mercedes C-Class drivers can now opt for a Coupé version – but at £1,600 more than the equivalent saloon, it needs to impress. We drove the three-door for the first time on UK roads, to find out whether it’s worth the extra money.
On looks alone, the Coupé is off to a great start. With a roofline that’s 41mm lower than the saloon’s, plus an AMG bodykit and 18-inch alloys as standard, it really stands out.
Inside, the four-seater cabin shares its dash with the recently facelifted C-Class saloon and estate. The materials are high quality and it is all well built.

Standard sports seats are supportive, plus fold forward to aid rear access. Tall passengers will find head and legroom tight, but the surprisingly large 450-litre boot compensates. On the road, the 2.0-litre diesel is a disappointment when you fire it up. The refinement expected from a Mercedes is missing on start-up and under full throttle, with a harsh note entering the cabin. While cruising, though, the engine fares much better.
With 168bhp and 400Nm of torque, the C220 CDI pulls well, and an 8.1-second 0-62mph time means it quickly gets up to motorway speeds. It’s efficient, too, claiming 53.2mpg with
our car’s seven-speed auto or 55.3mpg with the six-ratio manual. That’s down to the stop-start, but the set-up takes some getting used to. It tends to shut down the motor when you’re at a standstill for only a fraction of a second; holding the brake lightly resolves this.
Stiffer and 15mm-lower sports suspension is standard, as are adaptive dampers, which means the C-Class is agile but still comfortable. Yet little else about the driving experience has changed from the four-door – including the responsive but slightly lifeless steering.
Considering it doesn’t feel much different on the road to a C-Class saloon with sports suspension and the AMG styling pack, the Coupé’s £1,600 price premium suddenly seems a lot for a dash of extra visual appeal.
Share this on TwitterShare this on FacebookEmail