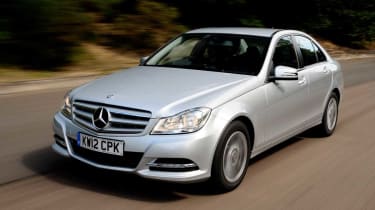 The C-Class faces very stiff competition from the BMW 3 Series and Audi A4, but this new basic trim level proves that Mercedes can do value for money. It comes loaded with kit that similarly priced rivals don’t have. Plus, it makes a good case for itself versus costlier C-Class models, thanks to its fantastic ride quality and low emissions.

There have been some changes to the Mercedes C-Class line-up, including the introduction of a new entry-level Executive SE trim that replaces the previous SE. But this is more than a name change: Mercedes has added more kit, too.

That means the most basic C-Class you can buy now comes with a sports grille, LED daytime running lights, new 16-inch alloy wheels and imitation leather seats. All of that comes for only £35 more than the outgoing SE, so our C220 CDI Executive SE saloon sells for £28,305.

Aside from the extra kit, Mercedes has also made the dials a little easier to read and the indicator stalk simpler to use by moving it further from the cruise control stalk.

But the changes end there, and despite the generous equipment list, the Executive SE’s interior looks a bit bland, with too much dark plastic.

Mercedes hasn’t made any changes to the way the C-Class drives, so buyers can expect the same great all-round ability that has made it so popular.

The C220 CDI is powered by a 2.1-litre 168bhp diesel engine and comes as standard with a six-speed manual gearbox. Even without the impressive optional seven-speed automatic fitted, there’s enough torque from the diesel engine to make sure you’re not constantly shifting up and down through the gears. There’s plenty of punch, too, with the 0-62mph sprint taking only 8.1 seconds.

While the 16-inch wheels on the Executive SE look a bit small, they do wonders for ride comfort. A C-Class with larger wheels is sometimes jittery on rough roads, but the Executive SE seems to float over them and makes short work of speed bumps and potholes.

It’s worth noting that the small wheels reduce CO2 emissions to 116g/km; the car emits 133g/km on 18-inch wheels.

It all goes to show there’s absolutely nothing wrong with opting for the most basic C-Class you can buy – in fact, there are some very good reasons why you should. And although it costs £35 more than the old SE trim level, it’s predicted to retain over five per cent more of its value when you sell it.