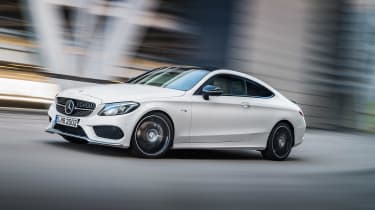 Mercedes has announced the latest version of its C-Class Coupe - a souped-up AMG version called the AMG C 43. It uses the same twin-turbo V6 engine as the recently revealed AMG SLC 43, and takes its place in Merc's half-fat AMG family below the bonkers 63 models.

Sitting below the range-topping AMG C 63, the C 43 gets a smaller engine and slightly diluted performance. That’s not to say it’s slow, though, with the new C 43 sprinting from 0-62mph in 4.7 seconds and on to an electronically limited 155mph top speed. For comparison, the AMG C 63 completes the same sprint seven-tenths faster. 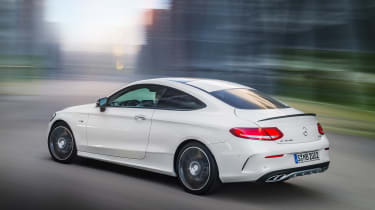 The 362bhp 3.0-litre twin-turbo V6 has been lifted unchanged from the SLK-replacing SLC 43. It boasts identical performance figures too, despite being a coupe rather than a convertible. All cars come fitted with the brand’s 9G-TRONIC nine-speed automatic gearbox, as well as 4MATIC all-wheel drive.

Despite this, the AMG C 43 gets a rear-biased torque distribution – sending 69 per cent of the engine’s power to the back axle. Mercedes says it has installed newly developed steering knuckles and load-bearing joints on the front axle, while the much of the setup has been derived from the sporty AMG C 63.

Behind the standard-fit five-spoke 18-inch alloy wheels sit a set of ventilated disc brakes measuring 360mm at the front and 320mm at the rear. Adaptive dampers are also included, which Mercedes says provides outstanding comfort thanks to AMG Ride Control. As always, the driver can flick through Comfort, Sport and Sport Plus modes, along with varying settings for the transmission. 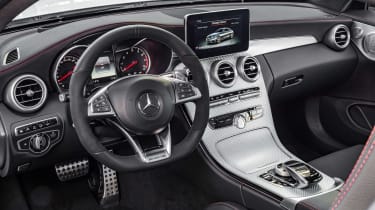 Elsewhere, the C 43 adopts its bigger brother’s styling, with bolstered front and rear aprons and bulging wheelarches. It’s altogether more subtle than the 63 – carrying over the diamond-effect grille from the lesser petrol and diesel models. It gets the same black mirrors and roof as the full-fat AMG, though, as well as the same black spoiler and quad-exhaust setup.

Inside, the perfectly finished interior translates from the existing Coupe. Faux-leather sports seats are standard, with contrasting red stitching throughout. The same 4.5-inch multifunction display sits between the chequered flag-style dials, while in the centre of the dash you’ll find a large tablet-like screen.

Prices and exact specifications will be announced closer to the car’s on sale date, which is likely to be this summer. It’s expected to undercut the AMG C 63 by several thousand pounds, though, starting from just over £47,000. 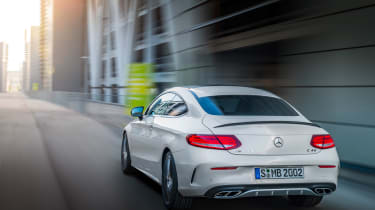 The C 43 is the first in a long line of 43-badged AMG models due this year. AMG chairman Tobias Moers said: “The 43 models boast the characteristic AMG genes, which are also included in our GT and 63 vehicles. These consistently interpret our brand essence of ‘Driving Performance’ in their segment.”

Significantly, Mercedes has trademarked A 43 along with other potential models – but officials refuse to confirm whether this points to the twin-turbocharged V6 engine ending up in the company’s five-door hatchback. It’s unlikely to happen in the existing A-Class, but a revised version of the Modular Front-drive Architecture (MFA) platform that underpins the car is due shortly – and it could conceivably accommodate the V6 motor in a transverse layout.

If it does not, it would mark a significant departure for Mercedes: the first time different engines with different numbers of cylinders have carried the same badging.

Do you prefer the half-fat Mercedes-AMG C 43 Coupe to its C 63 brother? Let us know below...