The first electric Mercedes EQ model has entered the final stages of testing, and we’ve been for a ride 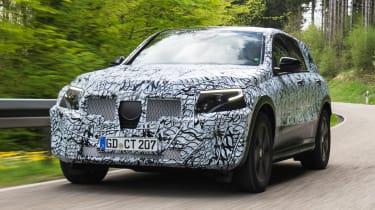 The first EQ model is hugely significant for Mercedes. Initial impressions are very promising, although we’ll have to wait a little longer to deliver our verdict from behind the wheel.

We rode around the block in the concept vehicle a year ago, but now Mercedes’ first full-electric EQ model is undergoing final testing.

We’re sitting alongside chief engineer Michael Keltz in a pre-production vehicle being driven in heavy disguise. The EQ C SUV will reach showrooms in 2019.

Inside, it feels as spacious as Merc’s regular GLC, but with a slightly lower roof. Despite being covered in cloth, it’s impossible to miss the large dual-screen set-up and MBUX infotainment system. Boot space looks good, too. 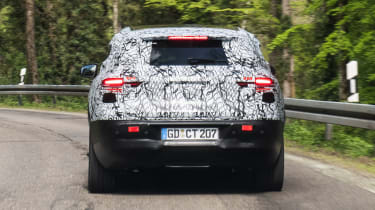 With a battery under the floor, the wiring loom is housed in the transmission tunnel. The car shares its platform with the diesel GLC, which means it can be built on the same line.

Keltz tells us the battery accounts for about 25 per cent of the EQ C’s weight. While he won’t say what that equates to, he doesn’t deny his engineers have had to work hard to manage the bulk.

Where there are challenges, there have also been opportunities; the EQ C’s tech enables new functionality. The ESP system can work directly on the electric motors, for example, using what Keltz calls “micro torque management” to aid the safety systems, which are now quicker and less intrusive.

That it’s quiet is no surprise, but the development team has worked exhaustively to remove any trace of electrical noises. Even by EV standards, the EQ C is eerily silent. There’s a touch of wind noise but that, says Keltz, is down to the hard panels that attempt to mask the new model’s shape.

There are two 250kW synchronous motors powering the car – one per axle – but the way they deliver their torque is different. The front axle motor is all about efficiency, and the rear one for maximum power to aid dynamics.

In regular driving the EQ C will run on the front motor only, and where possible it’ll disconnect and coast. Depending on drive mode, it’ll recuperate energy, too. Mercedes quotes an EV range of around 500km (310 miles), although this will be less under WLTP testing. Charging times will vary, but Keltz says that a 50 per cent fast charge should take around 20 minutes. 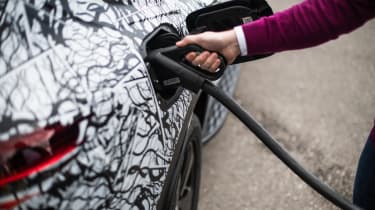 Keltz takes us for a ride at 120mph on the autobahn, while clearly enjoying the immediacy and force of the acceleration on country roads, too. It’s quick and on largely smooth German asphalt the EQ C seems to ride and handle nicely.

Despite its SUV looks, it’s only been tested on the road, because it has ground clearance equivalent to an E-Class Estate. The suspension is taken from that car, with self-levelling air springs at the back.

Mercedes will continue development right up to the launch, with the focus now on software changes. The physical parts are all ready for production, we’re told.