We go for a passenger ride in the Mercedes EQ concept, which previews the 2019 EQC production model that's set to arrive in 2019 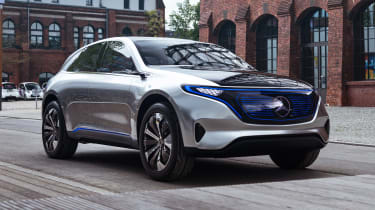 It’s very much a concept here, but if the 2019 production EQ can deliver even a fraction of the wow factor and ease of the show car inside and out, as well as the promised range and performance, then the switch from conventional fuels to battery power is something to look forward to - even if charging infrastructure questions remain a concern.

The EQ might just represent the biggest shift in Mercedes’s long history of producing cars. Unveiled at the Paris Motor Show in 2016, the EQ brand spearheads the firm’s push to future mobility, via a range of all-electric and plug-in hybrid models. The new EQ brand promises 10 fully battery powered models in Mercedes showrooms by 2025, and it’ll be introduced by the EQC, a production version of this concept car that wowed the crowds in Paris.

We’ve ridden shotgun in Mercedes most radical model ever, even if its SUV form, notwithstanding the concept-car styling, is fairly conventional. The market wants SUVs and, usefully, their high-riding stance suits electric powertrains. Mercedes engineers are not willing to discuss exactly what will power the production model in 2019, but we do know is there will be two electric motors with 300kW output, one for each axle, and that the EQC will be built on a EV-specific, scaleable platform.

The promise is a 0-62mph time of around five seconds, but more relevant is that the lithium-ion battery will have power density to allow 500km (310 miles) on a charge. The power pack will be built in Europe, by Daimler subsidiary ACCUMOTIVE, and Mercedes is investing over €1bn in its battery plant. It’ll deliver those lithium-ion batteries to Bremen, where the EQs will be built in Mercedes’s factory alongside 10 other conventionally powered current models. 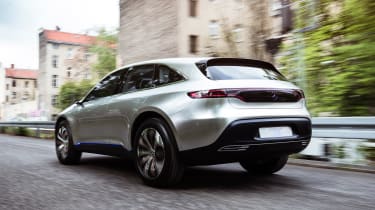 EQ will as much about technology as it is mobility and that’s apparent as soon as you get inside. It’s dripping in concept car cues, such as rear-view mirrors replaced by cameras and screens, and the absence of exterior door handles. The production car will be a bit more conventional here.

The interior should, however, carry over many of the concept cars’ cooler elements, Vera Schmidt, of Advanced Digital Graphic Design admits that “EQ creates a opportunity to try different things”. That different is largely centred around how all the elements interact inside - how the information is conveyed, accessed and controlled. A lot of effort has gone into reducing what Schmidt describes as the “information density” that can lead to distraction.

With the EQ, the instrumentation display is reminiscent of that in the current E-Class and S-Class, though simpler. The large single screen spans where a binnacle would usually be situated to the middle of the dashboard. It’s not touchscreen; instead a small touchscreen controller sits between the front seats and this, allied to an updated touch COMAND controller, operates the plentiful communication, navigation, information, climate and vehicle options. Those also work in conjunction with touch sensors on the steering wheel spokes.

The interior lighting is key; the heater vents change colour depending on the temperature setting and the ambient lighting gives details like charging status, while the pin lights in the doors could be used to signal vehicles in your blindspot. It’s all familiar Mercedes, but with a futuristic twist, and the interface is among the most intuitive we’ve experienced. If the production model is half as easy to use, that’ll be a very good thing.

On the road, from the passenger seat, it’s light, airy and spacious in the clean, beautifully finished interior. The electric drive only adds the serenity of that cabin, and it’s unsurprising that the EQ will feature the latest autonomous driving technology that makes its debut in the S-Class later this year. 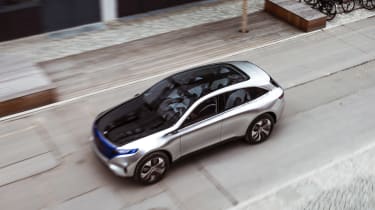 Thanks to the legislative hurdles that currently limit autonomy, Mercedes will have to play something of a waiting game regarding the infrastructure for EQ charging, but insiders admit the EQ will feature wireless induction charging capability and that the charging network for this is “coming”.

As for Mercedes’s plans for a whole ecosystem of EQ vehicles, with a suite of services to match like valet charging, and extensions on the Mercedes ME lifestyle app to facilitate things like car sharing, that’s still in the future. It’s a future that’s rapidly approaching, though, and potentially rather exciting.