If you wanted a Mercedes G-Class before, you’ll want one even more now. It’s better on and off road, while interior ergonomics, quality and functionality are all up to the standards we’ve come to expect from the German firm. It’s still a big, heavy and sometimes unwieldy SUV, and true rivals are few and far between, but that doesn’t stop it being an intriguingly competent all-rounder.

It’s nearly 40 years since Mercedes launched the first-generation G-Class. The basic shape has changed very little in that time, but for 2018 the rugged SUV has undergone its most significant transformation yet.

While it might look familiar, this new G-Class gets a new body, chassis, steering, suspension, engines and gearbox, as well as new driver assistance systems. The subtly revised design retains most of the SUV’s iconic features, however, including the bonnet-top indicators, visible door hinges, boot-mounted spare tyre and protruding wheelarches.

The boxy shape is similar, too, with a recognisably upright screen and characteristically square doors. Even so, bosses tell us just three external parts have been carried over: the washer jets, door handles and the protective cover for the spare wheel. 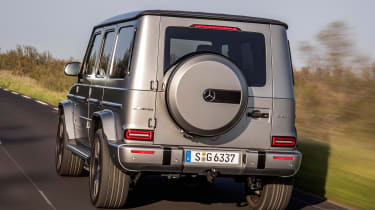 The G-Wagen’s rich history hasn’t been neglected inside, though. Key features like the chrome switchgear and passenger grab handle are carried over almost unchanged, and you still sit very high. Quality is worthy of the six-figure price, as well.

All UK cars get a digital dashboard, comprising two 12.3-inch screens with Merc’s intuitive COMAND infotainment system and touch-sensitive steering wheel scroll pads. Every model comes with a Burmester stereo and three-zone climate control, as well as a 360-degree camera, LED lights and a sunroof.

The G-Class is on sale now, and the first cars will arrive in July. Initially, the only model available will be the G 63 – either in standard guise or Edition 1 trim tested here. While that might not seem the most logical starting point, the outgoing AMG version actually outsold the diesel variant two to one. Every car gets a nine-speed auto box, four-wheel drive and three differential locks.

The G-Wagen still feels like a big car on the road. Its size makes city streets a challenge, while rural roads require new levels of spatial awareness. The vastly improved but still vague steering and poor turning circle ensure you’ll need to leave plenty of time for manoeuvres.

At higher speeds, though, the new car represents a big step forward. There’s lots of extra sound deadening, and while its bluff shape still generates significant wind noise at 70mph, it’s as refined as you’d expect a Mercedes to be. 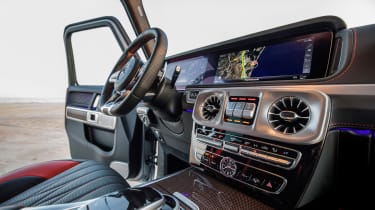 In the Comfort setting, the ride is best described as skittish. While it’s not harsh, the ladder chassis isn’t the most sophisticated set-up for an SUV, so it doesn’t feel as cohesive as other premium models. Neat trickery under the skin helps to keep roll in check, but the light controls offer little feel through fast bends. Yet you learn to trust the car. Despite its size, you can push it hard if you give the 2.5-tonne SUV time to stop. The brakes are strong, but its weight demands more anticipation than might otherwise be necessary.

With help from its three diff locks, the G 63 is unrivalled off road. There’s more ground clearance, and it’ll wade 10cm deeper than before. Approach, tilt and break-over angles are all improved, and a special G-Mode engages the low-transfer gearbox, ensuring unflappable traction.

Like any AMG, the 63’s trump card is its engine. The sense of theatre is as evident here as in an E-Class or S-Class, and is only emphasised by the howling side-exit exhausts. A touch on the accelerator sends the car forward at a rate of knots, chasing the next bend with real ferocity. With 850Nm of torque and 170kg less weight than before, throttle response is instant.

The G-Class now offers more leg, shoulder and elbow room, too, but if back seat space is a priority, a Range Rover will still serve you better.