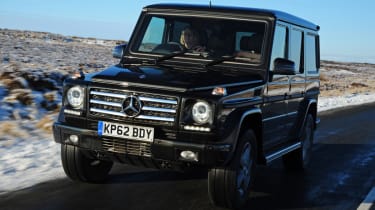 What a strange thing the Mercedes G-Class is: it's trimmed in luxurious leather, comes with a heated steering wheel and heated seats, but it's designed to spend its life axle-deep in mud. There's no denying the G-Wagen's off-road ability, but there's plenty of other cars out there that aren't as poor on the road as the G-Class is. It simply feels too cumbersome for you to ever be able to relax, and the diesel engine can be heard noisily in the cabin. Take your pick between the G350 CDI Bluetec or the storming G63 AMG, both offer impressive performance but will be catastrophically expensive to run.

Mercedes offers the G-Class with two different engine choices – the 3.0-litre V6 350 CDI diesel engine and a high-performance twin-turbo 5.5-litre V8 AMG version. The former is the best everyday vehicle with plenty of low-down torque and a surprising turn of pace. Go for the AMG version and you get something far madder, resulting in a 0-62mph time of 5.4 seconds. Whether you'd ever want to go that quickly in a G-Class is another matter. On the road it feels bouncy, unresponsive and incredibly unwieldy. The steering is slow and barely seems connected to the wheels while the cabin is incredibly noisy too. Take it off-road and the G-Class is transformed, it clearly feels at home in the rough with locking diffentials and a heavy duty mechanical four-wheel drive system too.

Picking a diesel engine is normally the perfect way to keep running costs low, but in this case every version of the G-Class will cost a lot to run. The G350 CDI is only capable of 25.2mpg and in the real world this is much nearer to 18mpg. CO2 emissions of 295g/km are also extremely high and will put this car in the second highest road tax bracket. Opt for the G63 AMG and be prepared to spend plenty of time filling up – despite the huge 96 litre fuel tank. The official figures stand at 20.5mpg and 322g/km of CO2. That means over £1000 in road tax during the first year and around £150 every time you fill up.

There's no denying that the Mercedes G-Class has a retro appeal to it. It was first sold in 1979 and the design has barely changed since then, with the turn indicators mounted on the bonnet, the bluff windscreen and the huge slab sides. A recent update added modern touches like LED lights and new trim bits but that's your lot. The interior has been changed throughout the years but only to add more leather and entertainment systems. The result is an environment that feels well screwed together but more than a little bit outdated.

With its boxy shape the G-Class does boast a very practical boot. There's a maximum of 2,250 litres on offer and the floor is can be had with a wipe clean lining, too, which makes it perfect for carrying dogs or muddy boots. The boot door itself opens sideways rather than upwards, and that means you need a great deal of room behind the G-Class to even open the boot. In the cabin, the rear seats could actually do with being a little more spacious and the car's high ride height can make it difficult to climb in and out of. For something so huge the cramped nature of the cabin will be a real dissappointment if you planned on using the G-class as a plush luxury SUV.

From the minute you close the door shut with a reassuring 'clunk' you know that the G-Class is the kind of vehicle you could run for hundreds of thousands of miles with very few problems. In fact you still see G-Class models from the late seventies and early eighties roaming the streets today. The hand-built vehicle feels extremely solid and all the electrics and mechanical components are tried and tested elsewhere in the Mercedes range with no problems. There's plenty of safety kit included as standard including ESP, Brake Assist and ABS. Driver, passenger and side airbags are also included but the G-Class has not been crash tested by Euro NCAP.