A new class war is about to begin for luxury car buyers. When money becomes less important than status, a top-flight saloon used to be the obvious choice. But the four-door limo now has another opponent to deal with: the premium 4x4 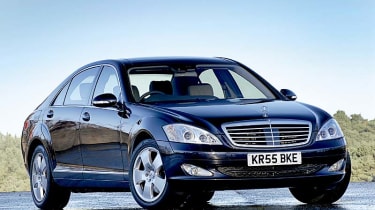 The new S-Class is quiet, comfortable and luxurious - few long-distance cruisers are better. But the blend of a V6 petrol engine and a long wheelbase won't be popular - the S350 L is no sports car. We can't wait to drive the diesel, which will account for two-thirds of UK sales, and is set to be 2006's must-have luxury car.

A new class war is about to begin for luxury car buyers. When money becomes less important than status, a top-flight saloon used to be the obvious choice. But the four-door limo now has another opponent to deal with: the premium 4x4.

In recent years, the Range Rover has drawn buyers away from the likes of the BMW 7-Series, Mercedes S-Class and Audi A8. Yet Merc reckons its revised flagship has the measure of both mud-plugging and saloon rivals. We took the wheel of the UK's first right-hand-drive car to see if the S is still top of the class.

The first aspect of the newcomer that's likely to divide opinion is the styling. Without the imposing angles which have given previous generations such presence, the latest model simply doesn't look as impressive. The lines do at least help disguise the car's size - it's only 10cm shorter than a Bentley Flying Spur.

Once inside, our misgivings evaporate. Nearly all the switchgear has been revamped to create a bespoke cabin feel, and build quality is out of this world.

There was no shortage of space for front and rear passengers in our long-wheelbase test car, and our only gripe regards the over-complicated Command cabin control system. It's not as baffling as BMW's iDrive, but still more difficult to fathom than Audi's MMI. Thankfully, getting on the road only requires use of the column stalk gear selector. At any speed, what's most impressive is the refinement, which matches that of the Lexus LS. Air-suspension irons out coarse surfaces to complete the relaxing drive.

Long-distance cruising is where the S-Class excels, and only when pushed does it start to feel heavy. Body control is better than its predecessor's, but numb steering takes the edge off the saloon's ability to tackle a challenging road.

What's more, this base V6 petrol car can feel underpowered. Performance is hardly lacking, but the seven-speed auto has to keep revs high to make the most of the pace. So while the new S-Class is undoubtedly superb, it will take more powerful petrol variants and the gutsy diesel to overtake the luxury 4x4.