I once heard that if Microsoft owner Bill Gates dropped a £50 note on the floor, it wouldn't be worth his time to stop and pick it up. 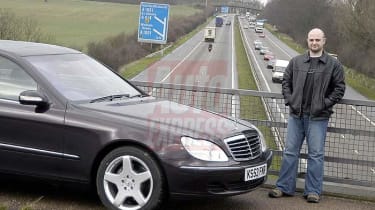 I once heard that if Microsoft owner Bill Gates dropped a £50 note on the floor, it wouldn't be worth his time to stop and pick it up. For people who can afford to spend £50,000 or more on a car, time really can be money. Which is why it must be disappointing for them to discover that it takes five minutes out on a cold forecourt to fill up their luxury car when it's empty of petrol every 200 miles. Even if the cost is not an issue, there is always something people would rather be doing than pouring fuel into their tank. Which is why the S320 CDI has to be one of the most complete luxury cars in the world. I agree that the engine is not as smooth as a V12, and that the 141mph top speed is less than an Italian supercar's, but the big Mercedes will go for 710 miles between fill-ups. There can't be many vehicles in the world which can be fully run-in before their second fuel stop is needed. The reason is that the S320 CDI will average 36.7mpg, and has a massive 88-litre tank. It's like the old story of the tortoise and the hare, but with a new twist. On a trip across Europe, I reckon the S-Class would beat a 500bhp SL55, as the sports car's speed advantage would be lost during the time it would take to stop for the extra fill-ups. The figures in our S-Class's trip computer haven't matched the official consumption totals yet, but there's an explanation for this. The S spends most of its time commuting, and the slog through the snow-clogged traffic a fortnight ago wrecked the average, dropping the mpg to only 11.3 at one point! Still, 27.3mpg is exceptional for a car of this size when it spends most of its time in town - and it shows 40mpg on longer runs. Another reason for the lower-than-expected average could be that the car is loaded down with options. Ordering an S-Class is a little like writing a Christmas list to Santa when you were a kid. There are so many goodies and gadgets to choose from that it's difficult to stop yourself going wild - until you see the prices. First of all there's the colour; silver is too predictable, black too limo-like and all the others aren't to my taste. I chose Almandine Black - an aubergine shade of dark red - which I think looks fantastic, although it seems to divide opinion. Then there's the stuff which costs real money. Searching through the hardbacked brochure, I thought the self-closing doors sounded like a good idea, but at £490 I can slam them myself. We've sampled Mercedes' very clever radar-controlled cruise control, too, and while it's good I can't see why it costs £1,600. Keyless go, standard on a Nissan Micra, is £860. There's even a fridge on offer, but at £610 it costs three times as much as the one in my kitchen. So I limited the choices to what I really couldn't resist, including 18-inch wheels for a beefier look than the standard 16s, parking sensors, a Bose stereo with CD-multichanger and seats which can massage, warm up and even cool down your behind. The hi-fi is among the best I have ever heard in a car. There's actually a surprising amount of kit as standard, though, including sat-nav, xenon headlamps and electric sunroof. But the best gadget is a small chrome handle which pops out of the bootlid when it's open. Shut it and the little catch retreats back into the bodywork, so it's kept clean for the next time you need it. I can't decide if it's impressive attention to detail or excessive over-engineering, but I do know that all those supercar owners will be getting their hands dirty on their bootlid - and filling up with fuel - while I'm cruising past looking smug.