Mercedes has done it. The S-Class is the best luxury car you can buy. 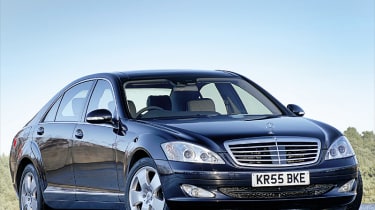 Driving The chassis is close to flawless. Adaptive air suspension gives a ride that has to be experienced to be believed; the cushioning is superb, yet the S is quick to recover composure, and even on rough surfaces there's no suspension or road noise. No rival can match the Mercedes for smoothness, nor body control or grip. And while the steering is slow, the S-Class excels in every environment. Although expensive, it really does set new driving standards. It's just a pity the 7G-Trionic gearbox kicks down so readily, rather than using the torque of the superb diesel and petrol engines. True, shifts are virtually undetectable, but the software needs more polish. No worries form the engines though; petrols are excellent, particularly the S 600L's 5.5-litre V12; the amazing acceleration defies your senses, as there's none of the noise normally associated with high speeds. Mind you, the top-selling diesel has smoothness and refinement that's on a par with petrol engines. When driving it, at no time did we wish we were in a petrol.

Marketplace Elegant and sophisticated, the S-Class has long been the world's best-selling luxury car. Not that the latest model treads a safe path. Styling is bold, brash and a bit showey; Mercedes obviously wanted the S to match the BMW 7-Series for visual impact, but we feel it's a backward step. Interestingly, it matches closely the BMW in dimensions, and also must battle against the Audi A8 and Jaguar XJ for buyer's hearts. Initially offered with a 3.5-litre V6, a 5.5-litre V8 and a 5.5-litre V12 petrol range, or a 3.0-litre V6 turbodiesel, the S-Class range also incorporates standard and long-wheelbase bodystyles. And choosing which body and engine is just the start: the options list is virtually endless. Competition comes from the Audi A8 and BMW 7-Series, plus the Maserati Quattroporte and Bentley Continental Flying Spur.

Owning Big rear doors make an immediate first impression, and a hydraulic strut provides a wide opening. Once inside, the roof-mounted mirrors, flip-down headrest and plump seats give the Merc a luxurious, cosseting atmosphere. Yet while superbly comfortable, the S is no more spacious than its rivals, even if the 565-litre boot is huge. It's the driving environment that's most puzzling though. The 7-Series' interior design and iDrive controller have been widely criticised, yet Mercedes has bravely decided to mimic them on the S-Class. However, the user interface and control knob are both easier to operate than the BMW's, and you don't take your eyes off the road as much. What's more, all-round visibility is excellent, the seating position superb and the seats themselves astounding - thanks to inflatable air cushions, we have no hesitation in declaring them the most comfortable we've ever tried. Diesel models are economical, and servicing is not too expensive given the sheer talent of the car - and when compared to ultra-exclusive rivals. Depreciation levels are, however, likely to be steep. Also, don't forget the S-Class is extremely expensive - particularly if you choose options such as a fridge, rear DVD player and Night Vision!