We review the Mercedes S300 Hybrid, powered with a 201bhp 2.1-litre engine boosted by a 27bhp electric motor 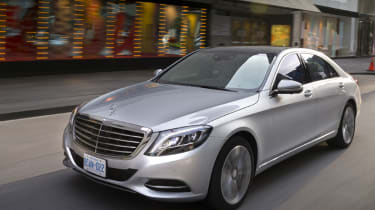 The S300 Bluetec Hybrid isn’t quite as special from behind the wheel as the S350 Bluetec we drove but its low running costs give it a whole lot more appeal for company car buyers. It still majors on refinement and ride comfort like the rest of the S-Class range but it’s the model that you choose with your head rather than your heart.

When we drove the V8-powered Mercedes S500 last week we gave it full marks, but it’s unlikely to find many buyers in the UK. The four-cylinder diesel-electric S300 Hybrid should prove more popular, but can it deliver the same strong performance and impeccable refinement?

Mercedes claims this car will do 64mpg and emits just 115g/km. That’s seriously impressive for a car this size, let alone one that has 228bhp. It also means company car buyers in the 40 per cent tax band will pay around £1,500 less per year than owners of the S350 Bluetec.

That power figure comes courtesy of 201bhp from the 2.1-litre diesel and 27bhp from the electric motor. Thankfully the economy figures are achievable, our test car returned 60mpg without too much effort.

In terms of refinement, the four-cylinder is nowhere near as smooth as the V6 in the S350 Bluetec, but it is just as quiet, with the engine bay excellently isolated from the cabin. You can pull away around town on electric power if you’re gentle with the throttle, too, giving the Hybrid excellent refinement in creeping traffic.

At motorway speeds you won’t be able to hear the engine anyway, and because there’s absolutely no wind noise at 70mph the noisiest thing you’ll be able to hear is the suspension moving up and down. You don’t get the same surge of effortless acceleration that you find in the S350 BlueTEC or in the S500 but with a 0-62mph time of 7.6 seconds, it certainly feels fast enough.

Thankfully, the added weight of the Hybrid’s battery pack hasn’t spoiled the ride comfort. It may not be quite as pillowy soft over big bumps as an S500 fitted with the Magic Body Control system - that scans the road ahead and prepares the suspension accordingly - but its still glides over imperfections in the road.

It leans a little more in the corners than a Magic Body Control equipped S-Class, though, but stick the suspension in Sport mode and it still feels stable and capable enough on twisty roads.

This was our first chance to try a short wheelbase version of the S-Class, and one with the standard rear seats rather than the fancy First Class style reclining massage seats as part of the Executive pack. There’s no doubting it feels a bit less special as a result, but there’s still plenty of legroom in the back and the cabin is still a work of art. You can always opt for the Individual rear seat pack, which brings seats that recline by 37 degrees, but if you want the full 43.5 degrees you’ll have to opt for a long wheelbase car.

The action of every single compartment opening in the interior feels well engineered, and the leathers, woods and metals used throughout feel extremely high quality. It still feels really hi-tech as well, with ambient lighting throughout and the two large 12.3-inch displays in front of the driver.

Prices for the S300 Bluetec Hybrid are expected to start from around £65,000, which is £2,000 more than the S350 Bluetec. From a driving point of view we certainly prefer the standard V6 diesel but from a financial standpoint, it’s the Hybrid that makes more sense.