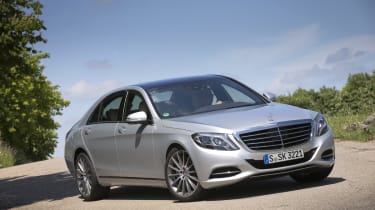 This latest Mercedes S-Class is a major improvement over its predecessor. You have to experience it to realise how comfortable and quiet it really is. It feels like one of the finest luxury cars ever made. We’d like to see how cheaper models with fewer options feel, but based on this evidence, the S-Class has got plenty more awards to come.

The current Mercedes S-Class may have lost its Auto Express Luxury Car title after six consecutive years, but now there’s an all-new model hoping to reclaim its rightful place for 2014.

The cabin will immediately blow you away. Top-quality woods, metals and leathers are spread generously throughout. The dashboard and door panels all flow neatly together, and seemingly every button you push or mechanism you touch has been painstakingly engineeredto feel of the highest class.

You get the same sense of luxury from behind the wheel. Refinement is impeccable and ride quality unmatched. Door seals have been reinforced, the double-glazed windows have been thickened and the aerodynamics improved. Even travelling at 140mph on the Autobahn, we could easily hold a normal conversation. Pull up next to a diesel-powered truck at traffic lights, and you could be fooled into thinking the truck’s running on electric power – that’s how impressively insulated the cabin is.

The standard air-suspension with adaptive damping feels untroubled by bumps, ridges or even potholes, gliding over each with nothing more than a slight vibration in the cabin.

Our S500 – and currently only this version – comes with the option of Magic Body Control, which scans the road ahead and sets up the suspension accordingly. With the system on, the ride is uncanny – if you drive over a speed bump, the body appears to momentarily detach from the suspension so you barely even notice the bump’s there. It’s the ultimate in luxury, but a costly £4,340 option on top of the hefty £88,130 for the S500 L model.

This car features a 4.7-litre V8, with 449bhp, but you’ll notice the 700Nm of torque more than anything. It arrives from 1,800rpm – with 500Nm from just after idle – launching you forwards as soon as you press the throttle. Acceleration from 0-62mph takes 4.8 seconds, and it’s absolutely effortless. There’s more weight in the steering than in the old car and a fair amount more grip through corners.

However, you’d be better off letting someone else drive and taking up a place in the back seats, especially if you go for the Executive seat package (a £5,000 option). You can recline your seat up to 43.5 degrees, pop up the leg rest and move the passenger seat forwards, so even six-foot adults can stretch out.

While practically lying down, you can opt for a hot stone massage from 14 separate air cushions mounted in the seat. Heated armrests and door panels are an optional extra.

Each rear occupant also gets a screen linked up to a 200GB hard drive and a high-performance Intel processor, allowing different screens to show different things. So while you surf the Internet, your friend can watch a film.

This big V8 engine may not be the best to showcase the S-Class’s new lower running costs, but it is slightly more efficient than the outgoing car’s, with economy up from 30.3mpg to 32.7mpg.

Better perhaps to look at the S300 BlueTEC Hybrid, which pairs a 201bhp 2.1-litre diesel engine with a 27bhp electric motor for economy of 64mpg and CO2 emissions of 115g/km. That model will be available in April 2014 – the same time the S500 goes on sale.

The S350 BlueTEC diesel and S400 petrol-electric hybrid will be the only models available when UK showroom deliveries start in September, while a plug-in hybrid S500 – promising more than 71mpg – is due in dealers here late next year.

This S500 L model may not be a big seller in the UK because of its poor fuel economy and near-£90,000 price tag, but with its incredible performance and optional Magic Body Control, it really is the ultimate version of one of the world’s best cars.