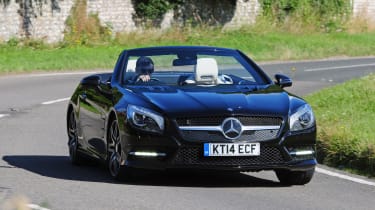 The entry point to Mercedes SL ownership is now better than it ever was. In fact, it makes recommending the SL500 that much harder. The SL400 is still not the car for everyone – it feels too comfortable and removed from the action to be called a sports car in the same vein as the 911. But if comfortable cruising is your thing, it’s an excellent choice.

The SL350 is out and the SL400 is in as part of a new line-up for Mercedes’ flagship sports car. A 329bhp 3.0-litre twin-turbo V6 replaces the old 3.5 naturally aspirated engine, providing 27bhp more power for the same price.

As a result the 0-62mph time drops from 5.9 to 5.2 seconds, giving just the kind of SL performance you want. There’s plenty of torque from low revs and a nice – but muted – exhaust rasp. It all feels less effort than in the old V6.

That easy comfort is what the SL is all about. Our car had Active Body Control air-suspension, which gives a really nice, cushioned ride – the standard springs are nearly as good, too. Over potholes the SL can’t disguise those heavy 19-inch rims sending a jolt into the cabin, but on the plus side it’s just as refined as an E-Class, making for relaxing motorway journeys.

As for handling, it’s on the relaxing side of sporty. It feels planted and predictable, with quick steering. You can’t help but be impressed by how the body stays flat through bends or the tyres refuse to lose grip, but a BMW 6 Series Convertible or Porsche 911 Cabrio are more intense and involving.

Oddly, this engine is no more fuel efficient than the one it replaces – it’s actually a little worse. Economy goes from 37.7mpg to 36.7mpg, and CO2 emissions are up from 169g/km to 178g/km. That’ll cost an extra £55 in road tax for the first year, but otherwise it’s a marginal difference.