Porsche says the 2012 911 Cabriolet is its best-looking, best-handling drop-top ever – we find out if that's true... 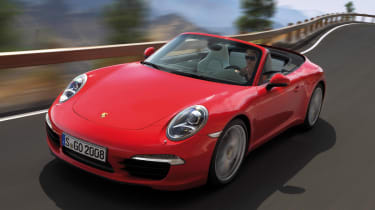 The new 911 Coupe is one of the best cars we’ve ever driven – and this Cabriolet version ticks all the right boxes, too. Unlike its predecessors, you don’t have to sacrifice good looks for open-air thrills. It’s enormous fun to drive, bringing you closer to the soundtrack of its incredible new flat six-cylinder engine than ever with a chassis that simply devours corners. At almost £10,000 more than the Coupe, the Cabriolet is not cheap. However, its strongest rival might not come in the shape of similarly priced competitors like the Audi R8 Spyder. Instead, Porsche's own Boxster, which arrives later this year and will cost around £40,000 less than the 911, promises an even more involving experience – if that were possible.

Advertisement - Article continues below
In the world of the 911, the Cabriolet has never been the traditionalist’s choice. Not as good looking as the coupe, or quite as focused, Porsche enthusiasts have always dismissed the drop-top as a car for those who like to cruise rather than drive.
But that’s all about to change with the new 2012 911 Cabriolet. Thanks to an extremely clever hood design, the new cabrio is as handsome as the coupe when the roof's up – and with a stiffer, yet lighter chassis than the old car, it promises to be just as good to drive.
The Cabriolet carries an £8,498 price premium over the coupe, meaning prices start at £79,947 for the 3.4 Carrera and £89,740 for the 3.8 Carrera S. But with an open roof giving the flat six-cylinder engine even more chance to serenade the driver, is the Cabriolet now the one to have?
It certainly has the kerbside appeal. Thanks to a new structure that allows the entire hood to be tensioned over four different sections, designers have managed to keep exactly the same sleek silhouette as the coupe with the roof in place. Drop the roof, and it hides beneath a subtle cover, doing as little as possible to interfere with the car’s lines.
Magnesium is used in the rear window frame, and together with the new aluminium-steel body, the Cabriolet weighs up to 60kg less than the old car. Other highlights include an integrated wind deflector – which folds out at the touch of a button – while you can raise or lower the hood in just 13 seconds at speeds of up to 35mph.
Elsewhere, it’s the same as the Coupe. So that means a new chassis with a longer wheelbase, a wider front track and new electro-mechanical steering, in addition to a higher quality cabin, with a Panamera-style centre console.
It hasn’t always been the case, but these days it’s easy to find a perfect driving position in a 911. The steering electrically adjusts for rake and reach, and even tall drivers will be able to get the sport seat low enough.
Just grasping that trademark thin-rimmed wheel is enough to get the pulse racing too – and the Cabriolet proves a fantastic driver’s car on the move. Our test car was a 345bhp 3.4-litre Carrera with the optional seven-speed PDK semi-automatic transmission.
The engine makes an incredible noise, ranging from a metallic rasp at low revs, changing to a deeper roar as speed increases, with a definite kick in the back as the needle hits 4,500rpm.  Switch to Sport mode, and the volume increases. Roof down, you can hear every single note – and it feels more involving than the coupe.
Porsche claims 0-62mph in 4.8 seconds, 176mph, 33mpg and just 198g/km of CO2 – figures which reveal just how fast yet efficient the new 911 really is.
With perfect gearchanges just a flick of a steering wheel paddle away  – downchanges are accompanied by a lovely blip of the throttle – the PDK transmission offers the kind of control that all levels of driver will enjoy. However, we still love the seven-speed manual and its beautifully placed pedals, which make heel and toeing easy.
In corners, the 911 Cabriolet is in its element. There’s barely a hint of shake or shimmy from the loss of the roof, and the ride, while firm, is pretty compliant given the incredible grip the car generates. Sport mode stiffens things up a bit and is a good compromise, but Sport Plus sees everything get a bit too jiggly unless you’re on a super-smooth piece of road.
The overriding impression, though, is of a car of huge ability. You’d have to be Porsche’s chief test driver, ex-rally ace Walter Rohrl, to notice any reduction in agility compared to the coupe. It turns into corners beautifully, feeling more eager than the old Cabriolet and yet more stable too.
What’s really impressive is the 911 Cabriolet’s duality. Slot the lever into Drive, put the suspension into normal mode and raise the roof, and it becomes a refined GT car in which you can cover distances with ease.
There are some downsides. The PDK box can kick-down even in manual mode, when you simply want it to rely on the torque of the engine. And when it comes to £80,000-plus drop-tops, an Audi R8 Spyder makes a bigger statement, while a Jaguar XK Convertible is more elegant.
Despite the roof’s ability to reduce noise, the 285-section rear tyres still make a racket on some motorway surfaces, and roof-down the hump which contains the roof mechanism does create a bit of an over-the-shoulder blind spot.
But like the Coupe, the new Cabriolet is a brilliant all-rounder. We reckon even traditionalists will love it.
Advertisement
Share this on TwitterShare this on FacebookEmail
Advertisement